I missed last Sunday’s Just Jared story about Terrence Malick having filmed a scene for Lawless last Friday (3.16) during SXSW. Lawless star Rooney Mara and Neon Indian frontman Alan Palomo did a scene together at Austin’s Fader Fort, according to the piece. 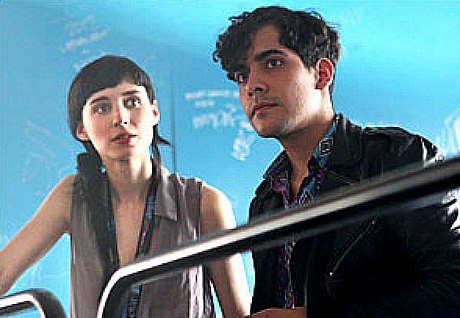 I’ve also missed descriptions of Lawless being “an indie-rock thriller” about “two intersecting love triangles, sexual obsession, and betrayal set against the music scene in Austin.” I knew about the music scene backdrop, but I thought it would be about loss and young love and birds and light and leaves and wheat fields and beautiful young men.

Let me explain something. It’s not in Malick to make a “thriller.” It just isn’t. His sensibilities are too delicate and ethereal to effectively serve the occasionally coarse requirements of a thriller.

Neon Indian is an oodly-doodly hipster band. I described the oodly-doodly sound last November as the product of “oh-so-dry-and-clever musicians wrapped in a fey musical head-space attitude who create songs that are kind of precious and tweedly-deedly…songs that fiddle around with melody without really feeling it or lifting it off the ground…bands that seem to be going ‘eewww, this is cool’…bands who perform with a kind of dorky, dispassionate irony.”

Lawless costars Ryan Gosling, Natalie Portman, Christian Bale and Cate Blanchett. The lensing of Lawless will be followed by the filming of Malick’s Knight of Cups.

Malick’s untitled Oklahoma love story (formerly referred to as The Burial) is, some say, due to hit screens later this year. I’ll believe that when I see it. Mr. Wackadoodle likes to take his sweet time in the editing room. I’ve said over and over that he needs a tough Bert Schneider-type producer who isn’t afraid to push him around and occasionally read him the riot act. 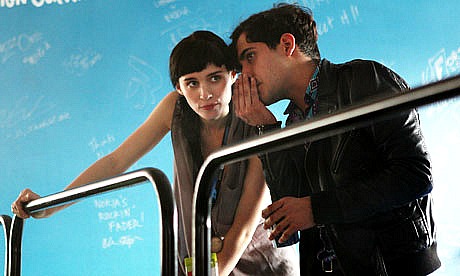