Comic-book artist Jean Henri Gaston Giraud, a.k.a. “Moebius,” died today in Paris of cancer, at age 73. Not being a comic-book guy, I first became aware of Moebius when he was referenced in a line of Quentin Tarantino dialogue from Crimson Tide (’95). Moebius drew a two-issue Silver Surfer comic book (under the title of “Parable”) in ’88 and ’89. Jack Kirby was the original Surfer creator, of course — even I knew that. 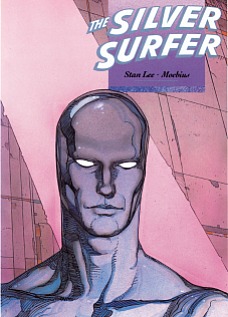 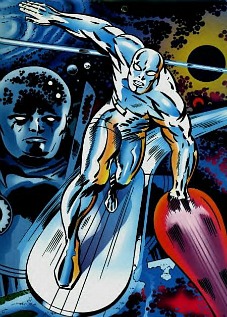 Hunter: I don’t give a damn about what you’d rather forget about. Why were you two fighting?

Hunter: Rivetti, you’re a supervisor. You can get a commission like that.

Hunter: It better not happen again. If I see this kind of nonsense again, I’m going to write you up. You understand?

Hunter: Do you understand?

Hunter: You have to set an example even in the face of stupidity. Everybody who reads comic books knows that the Kirby Silver Surfer is the only true Silver Surfer. Now am I right or wrong?

Hunter: Now get out of here.

And I don’t want to hear any bullshit about how I should be fully knowledgable about comic-book culture if I want to write about or reference any movie based on a comic book, etc. I hate fucking comic books for the dumb-down, pandering-to-bloated-junkfood-eating-geek effect they’ve had upon the plots of way too many mainstream adventure movies. I deeply respect the artistry of great comic books and high-end comic-book artists, and I’ve have spent many an hour studying the great stuff at Golden Apple, etc. But God, how I hate all abut a very select fraternity of comic book movies (i.e., Nolan’s Batman films).