I’m kicking around five reactions to John Carter, which I saw last night and which will surely die this weekend in relation to cost. (A three-day haul of $25 million may result in a $75 million domestic total vs. $250 production costs plus marketing…forget it.) I was in a kind of neutered middle zone about this Disney-financed, Andrew Stanton behemoth. I wasn’t succumbing to hate convulsions but I was somewhat bored at every turn. 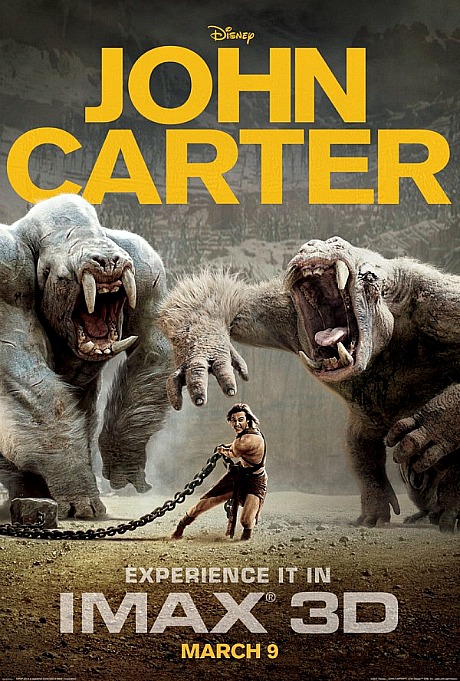 I sat there with my legs sprawled and my lids at half-mast and muttered snark to myself: “A worm hole, right, and a blue-light medalllion…wow, he can leap distances at a single bound…big deal… yup, saw that cliche coming…that one too…what kind of natural selection process poduces a species with four arms?…a flying fortress a la Return of the Jedi?…nice production design but who cares?…wait, isn’t that the same narrow rock canyon they used in The Professionals?…Mars looks like effing Utah…Jesus, another hour to go,” etc.

Impression #1 is that it contains one too many warring Martian species. You’ve got your tall, green, four-armed Tharks, which I kept calling Tar-Tars because on some level they reminded me of a race of spear-chucking Jar-Jars. You’ve also got your henna-skinned, English-speaking Red Martians and a strong, intellectual, take-charge princess (Lynn Collins) and her politically powerful dad (Ciaran Hinds). There are also the Red adversaries, the sorcerer-like Therns, and the corruption of a power-seeking Red Martian called Sab Than (Dominic West) by a senior Thern villain (Mark Strong). And then you’ve got John Carter (Taylor Kitsch) in the middle of all this, basically playing another generic, ripped, long-haired Clint Eastwood type — a gruff-spoken humanoid of few words and some difficulty voicing anything more than the simplest of sentences (“Get outta here!,” “You’re speaking English!,” “My name is John Carter…I’m from Virginia”).

Impression #2 (which I conveyed in last night’s Carter post) is that Kitsch kept reminding me of a blend of Jim Morrison and Jeffrey Hunter in King of Kings. I also kept thinking that the 5’11” Kitsch doesn’t seem tall or broad-shouldered enough to meet the macho requirement. A third-act dialogue scene shows him to be at least two inches shorter than the 6’1″ Strong, and this not-tall-enough feeling is underlined by his being surrounded by nine-foot-tall Tar-Tars…I mean Tharks…during the first two-thirds.

Impression #3 is that Collins is a first-rate actress who conveys a solid inner life, but she isn’t fetching enough for my taste. Especially after catching a shot of her at the recent John Carter Moscow premiere. Sorry but why was she chosen again? This is a fanboy movie. We all know what the game is, and if LexG were still around he’d be saying “why didn’t they cast someone actually hot?”

Impression #4 is that Carter is similar in some ways to Richard Fleischer‘s The Vikings (’58). Collins’ princess being forced by her father (Hinds) to agree to a political marriage to the detestable West = Janet Leigh‘s Princess Morgana being promised in marriage to the loathsome King Aella (Frank Thring) by her father. And at the same West resembles Kirk Douglas‘s Einar, a brute who sexually desires Leigh’s princess but can never have her emotionally as Morgana has fallen for Tony Curtis‘s Erik. Who is almost as primitive and monosyllabic as Kitsch’s Carter, who has won Collins’ heart in Carter. It all ties together, see?

Impression #5 is that I, sitting there all bored and distracted and slumping in my seat, would have much preferred to see a remake of The Vikings rather than John Carter. The Vikings story is more politically complex and yet less confusing, and better motivated and easier to follow, and I would have had no trouble buying Kitsch, Collins and West in the Curtis, Leigh and Douglas roles.

As I thought about this last night I was reminded that there’s nothing in John Carter that matches a certain emotional moment at the end of The Vikings — a moment that I described some six years ago in the wake of Fleischer’s death.

“The other thing that still works is the film’s refusal to make much of the fact that Douglas and Curtis, mortal enemies throughout the film, are in fact brothers, having both been half-sired by Ernest Borgnine‘s Ragnar,” I wrote. “Leigh begs Douglas to consider this ten minutes from the finale, and Douglas angrily brushes her off. But when his sword is raised above a defenseless Curtis at the very end and he’s about to strike, Douglas suddenly hesitates…and we know why.

“And then Curtis stabs Douglas in the stomach with a shard of a broken sword, and Douglas is finished. The way he leans back, screams ‘Odin!’ and then rolls over dead is pretty hammy, but that earlier moment of hesitation is spellbinding — one of the most touching pieces of acting Douglas ever delivered.”

I’m not trying to build The Vikings up beyond what it was — a primitive sex-and-swordfight film for Eisenhower-era Eloi. But it did invest in that unacknowledged through-line of “brothers not realizing they’re brothers while despising each other,” and this does pay off. It is one measure of John Carter that it doesn’t invest in anything that pays off and sticks to the ribs…nothing. It’s all about concept and production design and adherence to the original Edgar Rice Burroughs serial and all the other blah-dee-blahs. This is one of the things that really stinks about big movies today. They don’t invest in compelling story threads that build into emotional hooks.