You know what really carries Titanic 3D? What makes it an essential revisiting? Young Leonardo DiCaprio, who was 21 or 22 when Titanic was shot in mid the late ’96. For me, his performance as Jack Dawson is a time-capsule high. For me he was the whole thing– the one element I couldn’t take my eyes off last night.

The movie still works, still shatters…although James Cameron‘s cornball dialogue hurts more now than it used to. Some of the CG shots (sailboats and those doll-like passengers and crew in the wide shots) look even more primitive — naturally, inescapably — than they did in ’97. (I was asking myself why Cameron didn’t do a George Lucas and refine them a bit.) Kate Winslet looks softer, of course, and slightly chubbier that I remember, and Billy Zane…well, he’s pretty close to great in every scene. (Seriously — he makes so many hammy lines feel right, or at least a lot less painful.)

But DiCaprio is altogether heartbreaking, and that Dawson aura — that occasional giggly kid vibe and courage and dopey naivete, and that intensity and passion and the survive-at-all-costs attitude — feels like drugs.

As sappy as this sounds, I felt myself choking up a couple of times. Maybe it’s because I’m older now and I value youth all the more, but the prospect of this really young guy dying from hypothermia at the end of the film brought tears to my eyes. The moment when his corpse sinks into the blackest blue at the end hits that much harder.

We’ve all gotten older and have moved on and packed on a few pounds, but I hadn’t seen or felt this particular incarnation of DiCaprio on a big screen — Leo at his prettiest, liveliest and most vibrant with that beanpole body and movie-tanned skin and those luminous strands of straw-blonde hair — in 15 years, and I just couldn’t get over the irrepressible beauty of the guy. The absolute magnificence of being young and robust and beautiful and super-thin and spiritually aflame like a thousand candles kept hitting me over and over.

The Leo of The Quick and The Dead, Basketball Dairies, Total Eclipse, Marvin’s Room, Romeo + Juliet and Titanic (i.e., 94 to ’97) was a very special current at a special moment in time. Right after Titanic exploded DiCaprio retreated and became a kind of me-and-my-homies party hound, and except for The Man in the Iron Mask didn’t return until The Beach, and by then he’d turned a bit cynical (unavoidable) and been doing a lot of boozing. His face was rounder and his hair was shorter. He’d become a different guy and that whole mid ’90s thing was dead and gone. 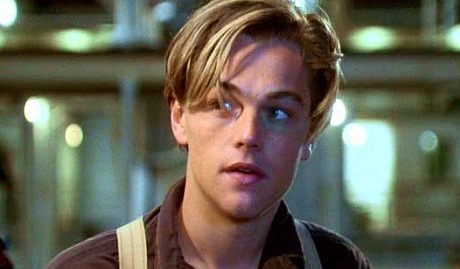