Bobcat Goldthwait‘s God Bless America (Magnet, 5.11) will be getting a lot of space on this site for the next month or so. Not because it’s a first-rate social satire or even an especially well-made film. But it deserves to be seen and discussed because it says some dead-on things about all the revolting people out there. Goldthwait hates like I do, and so he’s a kind of brother in a sense. If you believe that “hell is other people”, you’re going to love this film. Or much of it. 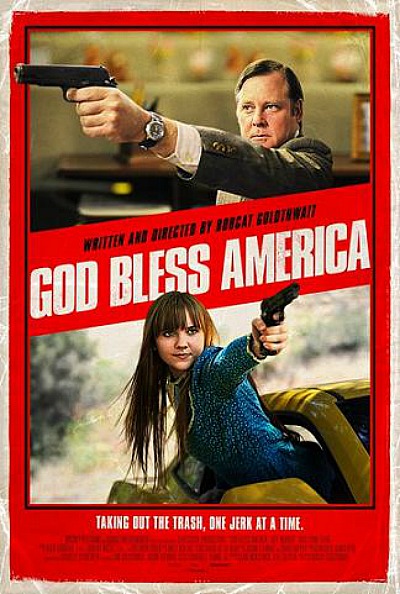 I just wish Goldthwait had tried a little harder and assembled something that works on a dramatic-emotional level, and not just a rhetorical one.

But this is a very moral film. Goldthwait is really saying something about the increasing levels of rampant egotism among the mall mongrels and people failing to behave in a considerate, compassionate fashion, and that things would be much nicer all around if people showed more class and manners and maybe read an occasional book or…you know, tried harder not to be dicks and assholes. As such God Bless America is bold and ballsy and deserves attention.

As the trailer makes clear and all the South by Southwest reviews have said, God Bless America is a low-key thing about Frank (Joel Murray), a depressed, pissed-off, older divorced guy who’s been canned and dissed by his young daughter and been told he might be dying from a brain tumor…this guy succumbs to a kind of Howard Beale-like breakdown and decides to start offing the most appalling people in society. The ego pigs, the Tea Party haters, the materialist whiners, the vulgarians, the movie-theatre texters, the people who occupy two spaces when they park their cars, and especially the American Idol stars, staffers, fans…and one of the talent-less contestants.

Frank’s first victim is a braying teenage bitch (Maddie Hanson) who has her own reality show. He loses control when he sees footage of Maddie throwing a tantrum at her 16th birthday party because her dad has given her a car that isn’t cool enough. So Frank plugs her…yes! A young kindred spirit named Roxy (Tara Lynne Barr) witnesses the killing and finds Frank at a nearby motel and praises him profusely and says, “Don’t stop now…keep it up!”

I wasn’t laughing at this film as much as smiling and snickering, but I did guffaw when Roxy suggests that Twi-hards should be placed on Frank’s hit list.

But I didn’t laugh much when Diablo Cody was mentioned as a possible target because she coddled and romanticized and half-endorsed teenage pregnancy with Juno, or so Frank believes. And I totally and radically disagree with Goldthwait’s condemnation of Woody Allen for falling in love with Soon-Yi Previn. Most of the targets in this movie are Middle-American mall people and anti-Obama, anti-gay righties and Tea Party slime, but Frank also hates showbiz lefties in certain ways.

Make no mistake — a lot of the folks who eat lead in this film deserve it in a metaphorical sense. And it feels good and satisfying to see them “pay”, if you will. And at the same time it feels a bit creepy. Obviously we’re meant to see Frank’s rampage as a form of acting out and not actual murder, but the shootings begin to seem cruel and excessive after a while.

What was the last significant film in which society’s sinners were killed for their venality? David Fincher‘s Se7en.

But because God Bless America is basically one long rant about how much of American society has sunk into a coarse and value-less pit of selfishness and snide attitudes and self-aggrandizement, it starts to lose its tension after the first 40 or 45 minutes, and then it just kind of treads water and hangs in there until the end.

There’s a shot of Frank and Roxy entering a movie theater, and we see a poster in the front for Man on Wire (’08), which apparently indicates Goldthwait was shooting this thing when George Bush was president. There’s an issue of possible sexual interest or tension between Frank and Roxy…dealt with and disposed of. There’s a curious absence of attention from the law as Frank and Roxy make their way around the country, starting in what appears to be their home town of Syracuse, New York, and then making their way south to Manhattan and New Jersey, and then across the country to Los Angeles. They’ve been captured on a security video camera and are driving around in a stolen yellow muscle car, and all Frank has done to evade capture is to switch the plates, once, and nobody “makes” them or finks them out? C’mon.