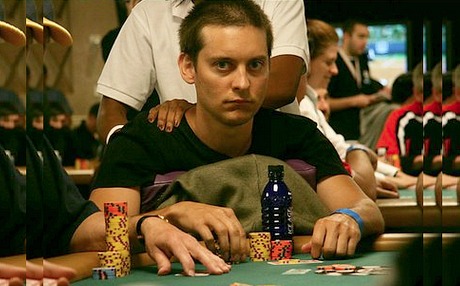 “Actor and lifelong poker player Kevin Pollak never played in Maguire’s game — so named because he is among its highest-profile participants and most faithful attendees. But he did play briefly with some of its mainstays, including Nick Cassavetes, former nightclub impresario Chuck Pacheco (now Cassavetes’ producing partner) and Rick ‘Scum’ Salomon, a featured player on Fox TV’s PokerStars Big Game, who once cleared Pamela Anderson‘s quarter-million-dollar gambling debt in exchange for matrimonial favors. And he’s got the scars to prove it.

“‘Cassavetes is one of the most dangerous players I’ve ever seen at a table,’ Pollak recounts. ‘You have to have a certain level of fearlessness along with savvy. If you add in a reputation and deep pockets – that makes someone dangerous.’

“Playing in a regular game that suddenly went from a thousand-dollar buy-in to $5000 virtually overnight, he found himself across the felt from Cassavetes and the others in what was now a full-contact sport.

“‘It was like being surrounded in the Old West by the best gunslingers in town, and I’m the Sheriff or something,’ says Pollak, who was the original host of the long-running Celebrity Poker Showdown on Bravo. ‘I was like, ‘We’re gonna need a bigger boat to get out of this.’ I only played with them for three weeks — three games — and then I said, ‘I’m done kidding myself…you guys are insane.’

“To them, it’s all relative. They play in their regular game [Tobey’s], and this is how they play. It’s a tactic — an investment in the future.

“Nick actually pulled me aside — I got up to go to the restroom, and when I came out, he was waiting for me. He took me into a side room and said, ‘Dude, you’ve got to lighten up. You could kill this game if you stopped being so upset about everyone playing like dicks. This is how we play, and you could be killing these guys, because half of them don’t know what the fuck they’re doing. They just know how to play like a dick. You actually know how the game works, so stop being so pissed off at everyone for over-betting 3-2 off, and take their money.'”