Roger Sterling (John Slattery) dropped acid with his soon-to-be-ex-wife Jane (Peyton List) on Mad Men this evening. It amused him for the most part. He didn’t appear to experience the exhilarating first hour (i.e., elevator in the brain hotel) and he didn’t travel inward in any noticable way, much less get “beautiful” in the Jimi Hendrix sense of the term. He held onto himself, kept his distance. Stared, listened. Which I found comforting and disappointing. Roger just wasn’t made for those times. And he doesn’t know or care all that much about Jane. 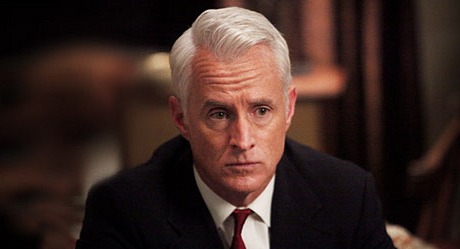 You don’t have to drop acid to realize that we’re all intertwined and vulnerable, so delicate and ethereal and humming the same ohhm, sharing the same pulse…everything and everyone in ways that defy strenuous attempts to explain. And all you have to do is let it in. Or not. But it’s there either way. For this and other spiritual “aha!” moments and sink-ins I have LSD to thank. I wouldn’t touch it with a 20-foot pole today, but without it I never would have known what I know or at the very least remember, for whatever that’s worth.

“I know, I know, you’ll probably scream and cry that your little world won’t let you go…”

I don’t know if Devin Faraci has been “beautiful ” or not, but he understands the LSD thing pretty well.