The Dictator Hits It

Sacha Baron Cohen and Larry Charles‘ The Dictator (Paramount, 5.16) screened late last night (11:30 pm) to a packed house at Las Vegas’s Rave plex. I was there — alert, laughing, surprised, pleased — along with Indiewire‘s Anne Thompson and Hitfix‘s Drew McWeeny (who drove up from Los Angeles just for this) and several Cinemacon invitees. And the film works — it’s frequently funny and fast-moving and inventive. And it’s not just another Borat-Bruno here-we-go-again yaddah yaddah, which I had feared it might be. 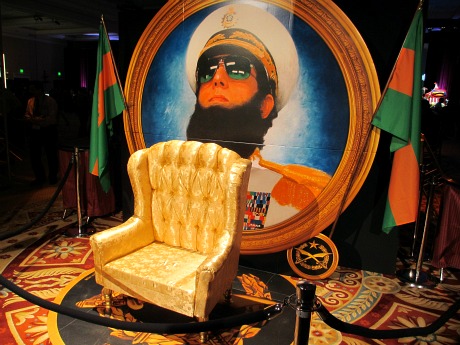 Okay, don’t trust me (I don’t care) but it was clear to yours truly and presumably others last night that (a) The Dictator is much, much better than Bruno, (b) it’s not a victim-punking mockumentary but a ludicrously farcical movie-movie with an arc and character development and a payoff — a personal journey of awakening (“like Eat Pray Love,” as Cohen’s General Admiral Aladeen quips during the last third) that is mostly ridiculous but isn’t dismissable, partly because (c) it has actual political content and a great political third-act speech that for some reason reminded me of a payoff moment in a Preston Sturges film (like Hail the Conquering Hero, perhaps).

And it has a brilliant 9/11 terrorist humor scene — yes, that’s what I said. And it makes superb use of a severed head. And it lampoons Middle Eastern sexist-animal attitudes like no film ever has or likely will again (conservative asshole males in Middle Eastern countries are going to have a problem with The Dictator).

And it has two…okay, two and a half clever and amusing supporting performances that generate their own action. I’m speaking of Ana Faris, playing a kind of romantic straight woman role and delivering the emotional anchors as the manager of a Brooklyn natural-food store (and wearing a mousey little pixie cut with her natural brown hair) who befriends and gradually becomes close to Cohen’s Aladeen, and Jason Mantzoukas as a bearded rocket scientist from Aladeen’s home country of Wadiya who was thought to be executed but wasn’t and emigrated to the US, and who befriends Aladeen as a kind of struggling equal and co-conspirator. The good half-performance come from Ben Kingsley, who is his usual expert self but hasn’t been given enough of a part.

The political speech that I love so much addresses the notion that the U.S. is almost as much of a dictatorship as Wadiya. Cohen explains how and why in ways that Bill Maher has articulated many times, but it’s refreshing and delightful to hear a genuinely truthful and blunt and ballsy observation inserted into a comedy of the absurd.

McWeeny has called The Dictator “the single most degenerate Jerry Lewis film ever made” and “a profoundly dirty movie” and that “there are few lines Cohen does not happily cross in his desire to upset.” Yeah, okay. The Jerry Lewis film I was thinking of was Visit To A Small Planet. 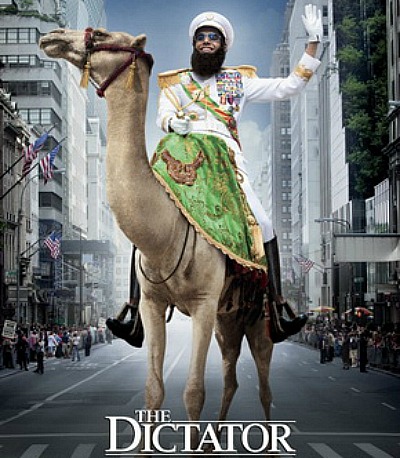 McWeeny notes that the script (by Cohen, Alec Berg, David Mandel and Jeff Schaffer) has “a few big set pieces that are in startlingly bad taste…if you are easily offended…hell, hell, even if you’re not easily offended…chances are Cohen will find the thing you won’t laugh at, and he’ll push that button repeatedly.” Which is the Cohen m.o., right? I think we all know that, and that the shock aspect is the point and so on.

I have to take a shower and get the hell out of here so I can catch the 9:30 am Warner Bros. presentation but The Dictator is, to repeat, a much more satisfying package than anyone anticipated, or so I suspect.

The screening began about a half-hour late due to Paramount publicists holding things up so that Cohen-as-Aladeen, dressed in white military jacket and beard, and four or five Wadiya armed soldiers could enter from the rear and Cohen could do a comedy routine (which he had delivered a few hours earlier at Ceasar’s Palace in front of a big Cinemacon crowd).