The next three days of Hollywood Elsewhere (Tuesday, 5.29 through Thursday, 6.1) will not offer anything original from yours truly. 11:30 am Update: I’ll actually stay on the stick until 4 or 5 pm today but after that I’ll be taking this time off, so to keep the ball in the air I’ll be posting a few reader submissions plus a few stand-out pieces from years past. Like this January 2006 review of Sidney Lumet’s Find Me Guilty. 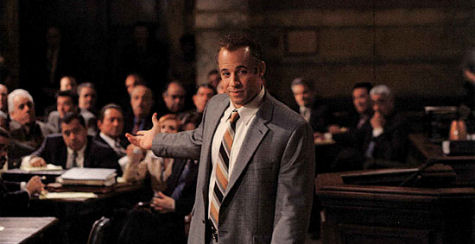 “Find Me Guilty isn’t just about the rebirth of Lumet’s career (at age 82!) and that of his star, Vin Diesel. It’s also a kind of Damon Runyon-esque joyride — an ethnic-Italian, New York-attitude sociopath movie for those who wink at the bad guys and chuckle when they manage to maneuver their way around the law.

“Maybe I’m jaded or I’ve just been Godfather-ed and Soprano-ed into submission, but I bought into most of it and felt pretty much delighted with the care that went into the making of it, and the final ambiguity of it. I was also a bit troubled by it. And yet fascinated.

“Find Me Guilty is about a wise guy who refuses to rat out his wise-guy friends, even when most of them shun him and treat him like a leper because of his court behavior, but who nonetheless holds to his own moral ethical course. I’m not going to spill the ending but this is not a movie that ends with the clanking of prison-cell doors a la Goodfellas.

“Plus there’s Peter Dinklage and Annabella Sciorra‘s superb acting. I genuinely feel that Dinklage, playing a shrewd mob defense attorney with a gift for persuasive oratory, is the first serious contender for Best Supporting Actor for the ’07 Oscar Awards (or at least the ’07 Indie Spirits). And Sciorra almost does here what Robin Wright Penn did last year in Nine Lives, and that’s really saying something.

“But there’s some mucky-muck going on. Shot in late ’04, Find Me Guilty has had distribution troubles (it was shopped around and nobody bit) and is being sold the wrong way — the trailer tries to tell you it’s a jaunty mob-guy comedy, a kind of farce, and the music toward the end of the film tries to convey this also, and this feels like a sell-out to the moron trade.

“The film not without its amusements and gag lines from time to time, but Find Me Guilty is a fairly serious, rooted-in-reality court procedural about wise-guy morality, or the urban mythology about same. 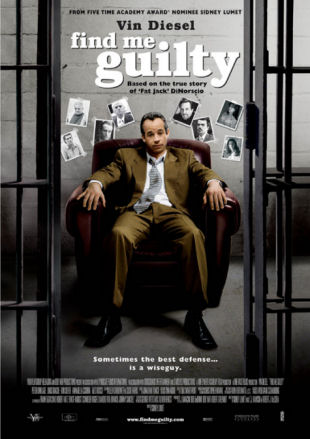 “It’s clearly Lumet’s best film since Q & A (1990), and before that Prince of the City (1981). It’s a tight, no-nonsense court drama that’s not about legal maneuvers or discovering evidence or doing right by the system and justice being served, but mob family values.

“In a stuffed-manicotti way, Find Me Guilty is as much of a values-based entertainment as The Passion of the Christ, My Big Fat Greek Wedding, The Thing About My Folks and Madea’s Family Reunion. I’m serious.

“There’s more time spent in a courtoom in this thing than in Lumet’s The Verdict, and for good reason: Find Me Guilty is about the longest-lasting federal criminal prosecution in history. From March ’87 to August ’88, 20 members of the New Jersey-based Lucchese crime family, each represented by his own lawyer, were brought to trial in Newark, New Jersey, on some 76 charges (dope smuggling, gambling, squeezing small businesses…the usual mob stuff).

“The feds felt they had an air-tight case, but when the verdict came down…well, let’s not say. But I’ll tell you right now that some people are going to have a problem with this film because of the ending, and especially the tone of it.

“The Hollywood Reporter‘s Kirk Honeycutt has already voiced this reservation in his review from last month’s Berlin Film Festival. The community values espoused (or at least given a fair examination) by this film are, from a strictly law-abiding perspective, totally goombah and wholly corrupt. And yet what’s being said here is not without a certain resonance, a certain sincerity of feeling.

‘”These values can be summed up by the words ‘don’t rat,’ ‘don’t roll’ and ‘family is everything.’ I’m no goombah but I sympathize with these sentiments, so I guess that’s part of the territory.

“I’m talking about the values of a group of bad guys (i.e., men who live outside the law and occasionally enforce their ethical standards by whacking each other) who ostensibly care for and someitmes ‘take care of’ each other, and about one particular bad guy — Diesel’s Jackie DiNorscio — who stood up for certain things over the course of this trial …loyalty, friendship, togetherness…even if the reality of Italian crime ethics, going by everything I’ve heard, is that everyone rats out everyone else sooner or later and a lot of these guys are just full-out sociopaths, or are viewed this way by the majority. And yet Guilty isn’t an invented story.

“This, for me, makes it absolutely fascinating because Lumet, Mancini, McCrea and Diesel are making a moral statement that they obviously have some kind of respect for, and in a serious way. Diesel does his courtroom buffoon routine for entertainment value at regular intervals, but otherwise Find Me Guilty is a fairly sober piece that asks you to grapple with who and what DiNorscio is, and what he’s really saying.

“The story points and much of the dialogue in Find Me Guilty are taken from court records and based on hard facts, so there’s obviously a kind of embedded truth in what we’re seeing, but let’s face it — if you were to show this film to Tony Soprano’s crew they would eat it up like baked ziti.

“But show this film to a group of straight-arrow law officials from outside of the New Jersey-New York corridor who haven’t seen other ethnically-correct mob movies, and some of them will undoubtedly say, ‘What the hell is this? Has Hollywood gone totally corrupt?’ And yet the events depicted happened.

“What’s really striking is that Find Me Guilty is pretty much the precise moral opposite of Lumet’s Prince of the City (1981), which is about the emotional agony that a corrupt cop puts himself through when he decides to tell the absolute truth and rat out his equally corrupt cop friends, and ends up despised and lonely and broken. 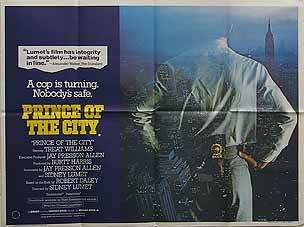 “Has there ever been a major-league filmmaker besides Lumet who has made two films about the same culture — the New York-area criminal underworld — with both (a) based on a completely true story about courts and prosecutors and defendants, (b) both grappling with almost the exact same moral-ethical issue, and yet (c) coming to almost the exact opposite conclusions about ratting out your friends?

“There are no almost double features these days except at L.A.s Beverly Cinema and New York’s Cinema Village, but Find Me Guilty needs to be paired next year on a double bill with Prince of the City. And when that happens I’m going.

“The more I think about this film, which at times feels like a close cousin of William Friedkin’s The Brinks Job, at other times like an earnestly intended moral fable, at at still other times like Prince of the City‘s sociopathic, wise-assed younger brother with a fuck-you-John-Law attitude….the more morally curious and unto-its-own-realm it seems.

“I think this is why the distribution community passed — they don’t know what to make of it, and are a little afraid of how the average moviegoer (i.e., those over-30s who will be persuaded to give an old-fashioned Lumet film a shot in the first place) might react. 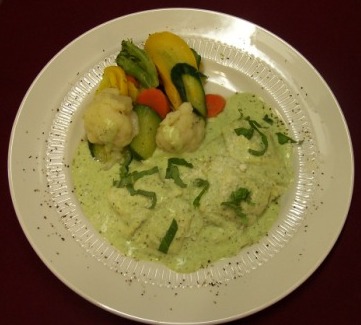 A dish of cheese ravioli

“The hard truth is that Find Me Guilty will most likely tank on its first weekend, but it shouldn’t. It’s a quality thing all the way, it isn’t the least bit boring and is easily among the best of the year so far (alongside Why We Fight, Fateless, Totsi, The Three Burials of Melquiades Estrada and Neil Young: Heart of Gold).

“There’s no denying that from a craft perspective Find Me Guilty is simply one of the Lumet’s best ever. Mancini and McCrea’s dialogue is sharp, honed, and perfectly seasoned. And his slightly fake-looking rug aside, Diesel is amazing. At times he seems to be just joshing around and more into charming the audience (along with the on-screen jury) that rendering a character, but it gradually seeps in that he’s really playing Jackie DiNorscio and capturing what made him tick and who he really was.

“And the supporting actors…fuhgedaboutit. Dinklage (that very cool short guy from The Station Agent) delivers a pitch-perfect performance — an utterly believable incarnation of a fully-rounded hardball lawyer. Sciorra has only one scene with Diesel, in a tiny prison holding room, but the husband-and-wife vibe is dead-on with the old resentments and sexual current getting stronger and stronger — it’s a near-classic scene.

“Also excellent are Ron Silver as the presiding judge, Alex Rocco as the viper-like head of the crime family being prosecuted, and Linus Roache as the steely-eyed, go-for-broke prosecutor.

“There are fifteen or twenty other actors who are just as good — this film has been perfectly cast in the legendary Lumet-New York street guy tradition by Ellen Chenoweth and Susie Farris. Cheers also for the cinematography by Ron Fortunato, which is beautifully framed and lighted in the manner of The Verdict at times.

“Find Me Guilty is not as good or as interesting as Lumet’s two greatest New York dramas — Dog Day Afternoon and Serpico — because it feels a little too smug at times, a little too invested in trying to charm the audience with a yea-team finale (using swing music and that Louis Prima tune at the end really undercuts it…a Big Mistake), but it’s certainly in the same moral ballpark, delivers the same high-quality acting and has the same kind of precise and disciplined filmmaking chops that made Prince of the City a great New York drama.

“I went in to last night’s screening expecting to see a movie with at least a few problems (given what I’ve heard about the distribution siutation), and I came out almost totally delighted.

“Part of the satisfaction of this film is seeing that Lumet still has it together like he did 20 or 30 years ago. He’s been on the ‘over’ list for the last ten years or so, but no longer.

“I don’t think it’s a stretch to call Find Me Guilty one of the best films ever made by an 80-something director, which, in this light, puts it alongside John Huston‘s Prizzi’s Honor and Robert Bresson‘s L’Argent. And that’s good company.”