“Closer Than That, Walter”

The Masters of Cinema Bluray of Billy Wilder‘s Double Indemnity (1944), which I ordered weeks ago, will include an “extract” from the original screenplay depicting the excised gas chamber ending, which was filmed by Wilder but removed from the final version because it was deemed too depressing and “unduly gruesome.” 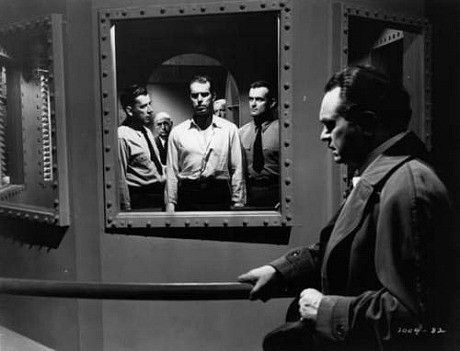 Consider this passage from filmsnoir.net: “In his 1998 book on film noir, More than Night: Film Noir in Its Contexts, James Naremore offers this penetrating analysis and critique:

“The execution described in the longest version of the script greatly increases our sympathy for Walter Neff (Fred MacMurray), all the while raising questions about the criminality of the state. It also provides a tragic recognition scene for Barton Keyes (Edward G. Robinson), who is shaken out of his moral complacency.

“This last point is especially important, because Keyes functions as a representative of the insurance company. Although he approaches his work with the intuitive flair of an artist and the intellectual intensity of a scientist, he remains a loyal agent of industrial rationality — a talented bureaucrat who, in effect, has helped to create the office building, the drive-in restaurant, the supermarket, and all the other landmarks of modern Los Angeles that the film relentlessly criticizes.

“One of the many virtues of Wilder’s original ending is that this complex, brilliantly acted character would have been made to confront his inner demon and to experience poetic justice. Keyes would have been brought face-to-face with the culminating instance of instrumental reason, the “end of the line” for industrial culture: the California gas chamber.

“For the original version of Double Indemnity, Paramount built an exact replica of San Quentin’s gas chamber, depicting it as a modern, sanitized apparatus for administering official death sentences. At considerable expense, Wilder photographed the step-by-step procedure of execution, emphasizing its coldly mechanical efficiency. There was no blood, no agonized screaming, and, for once in the movie, almost no dialogue.

“Much of the sequence was shot from Walter’s point of view, looking through glass windows at the spectators outside the chamber — an angle creating a subtle parallel between the chamber and the ‘dark room’ of a movie theater. When the fatal pellets dropped, clouds of gas obscured the windows, and we could barely make out Keyes standing amid the witnesses, turning his head away. Soon afterward, a doctor entered the chamber to pronounce Walter dead. According to the script, the original film ended as follows:

“‘All the witnesses have now left except Keyes, who stares, shocked and tragic, beyond the door. The guard goes to him and touches his arm, indicating to him that he must leave. Keyes glances for the last time towards the gas chamber and slowly moves to go out. CORRIDOR OUTSIDE THE DEATH CHAMBER CAMERA SHOOTING IN THROUGH THE OPEN DOOR AT KEYES , who is just turning to leave. Keyes comes slowly out into the dark, narrow corridor. His hat is on his head now, his overcoat is pulled around him loosely. He walks like an old man. He takes eight or ten steps, then mechanically reaches a cigar out of his vest pocket and puts it in his mouth. His hands, in the now familiar gesture, begin to pat his pockets for matches.

“‘Suddenly he stops, with a look of horror on his face. He stands rigid, pressing hand against his heart. He takes the cigar out of his mouth and goes slowly on toward the door, CAMERA PANNING with him. When he has almost reached the door, the guard stationed there throws it wide, and a blaze of sunlight comes in from the open prison yard outside. Keyes slowly walks out into the sunshine, a forlorn and lonely man.’

“Until someone rescues this scene from the Paramount vaults, we will never know if it is superior to the current version, and even then there may be room for debate. One thing, however, is clear: Keyes’s lonely walk out of the prison would have thrown a shadow over everything that preceded it. It was not until Sunset Boulevard and Ace in the Hole that Wilder would produce such a savage critique of modernity. Although the released version of his famous thriller remains an iconoclastic satire that challenges the censors, it is a lighter entertainment than the original and a much easier product for Hollywood to market.

“No matter how much we admire the film that was exhibited in 1944, the form of cinema that the French described as noir is probably better exemplified by another Double Indemnity, which we have yet to see.”

In a July 1975 Images Journal interview with Robert Porfirio, Wilder said the following:

“We were delighted with [the gas chamber ending] at first. Fred MacMurray loved it. He didn’t want to play it. No leading man wanted to play it, initially. But then he was absolutely delighted. I am a great friend of his, but can tell you when he shot the scene, there was no hesitation, no nothing, no problem with his performance. I shot that whole thing in the gas chamber, the execution, when everything was still, with tremendous accuracy.

“But then I realized, look, this thing is already over. I just already have one tag outside that office, when Neff collapses on the way to the elevator, where he can’t even light the match. And from the distance, you hear the sirens, be it an ambulance or be it the police, you know it is over. No need for the gas chamber.”