Dark Shadows Is Okay If…

I was prepared before seeing Tim Burton‘s Dark Shadows this afternoon at Berlin’s Cinestar plex. It has a shitty Rotten Tomatoes grade (51% positive), and the word has been out for a while that it’s spotty at best with a dopey script and not much cohesion. But it looks so rich and sublime, you see. It’s an absolute pleasure to just sit and watch and not listen to or care about. 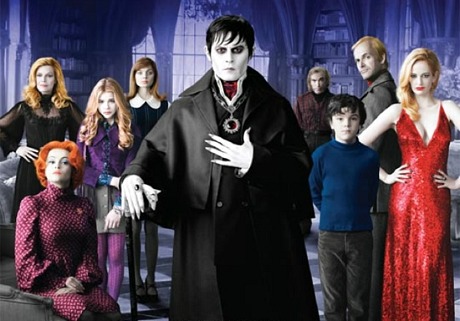 Burton creates visual art that you can hang on a museum wall, and if you can shut off the usual movie-watching expectations Dark Shadows is a very pleasurable way to spend 113 minutes. Just pretend you’re strolling through a motion-y MOMA exhibit.

I felt underwhelmed but not pissed off. I shrugged, smirked and mostly dug what it was. No anger. Just don’t go expecting anything like Beetlejuice or Ed Wood or Sweeney Todd or Edward Scissorhands — those days are over, I’m afraid. And take comfort, at least, that it’s better than Charlie and the Chocolate Factory and Alice in Wonderland.

Forget the underwritten characters, the obligatory fire-and-destruction CG in the third act, the ridiculous introduction of a werewolf manifestation during the last ten minutes and all the other stupid crap. Burton has never been much of a storyteller — we’re all used to his shortcomings in this department. He’s a production designer who feeds off off the feature film racket. And so he’s obliged to hang his darkly creepy visual panache and downbeat attitude humor on the clothesline of at least a semi-rickety plot with semi-fleshed-out characters, etc. He directs films because they give him a bigger audience and a much bigger payday than creating art for galleries or whatever.

I knew early on that Dark Shadows would be a thin sandwich and that I had to settle into it as a visual thing only or leave. And that’s what I did — I stayed and more or less grooved on Johnny Depp‘s lovely black-and-white skin and inky black hair and the lustrous orange in Helena Bonham Carter‘s hair and the delicate, fine-boned beauty in the face of Bella Heathcote and the gray turbulent sea at the foot of a rocky cliff and that standardly gothic home in which the Collins family resides, etc. And Michelle Pfeiffer‘s huge ’70s hair and eyeliner and unpainted toes. I was fine with all of this. I just sat there and sank into it and didn’t nod off, not once.

But God, that third act is awful! “The script is shit and I think even Burton knew it when he was shooting,” I told myself around the 40-minute mark, “and he didn’t mind because he knew guys like me wouldn’t mind either.”