The Playlist has reported about Brian DePalma‘s Passion, a remake of the late Alain Corneau’s 2010 French thriller with Rachel McAdams and Noomi Rapace respectively playing the Kristen Scott Thomas and Ludivine Sagnier parts, being “repped” on the Croisette “as one of the myriad films on the block.” Does that mean it’ll be screened or…? 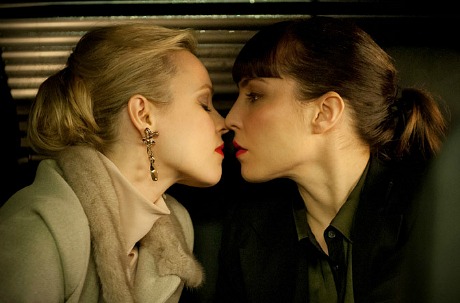 Apat from the intimations of eroticism between Rapace and McAdams, the most striking thing is that McAdams, born in ’78, has been cast in the role of an older, well-established head of a fast-track company which Thomas, born in ’60, played in the Corneau. As McAdams was pretty much a spring chicken when she broke through seven years ago in The Wedding Crashers and The Family Stone, it seems like a stretch to be playing a character inspired by someone like Anna Wintour. This indicates there are other things about DePalma’s version that may seem curious or miscalculated.

McAdams plays Ben Affleck‘s significant interest in Terrence Malick‘s The Burial, which seemed like a fairly likely inclusion at Cannes until Malick did his usual-usual and didn’t submit it.

I wrote the following last summer after seeing Corneau’s original at the 2011 L.A. Film Festival: “Love Crime is an icy, brittle thriller about a corporate power war between a 40something super-exec (Kristin Scott Thomas) and a 30something up-and-comer (Ludivine Sagnier). I’m not spilling details but I do find it strange that a perpetrator of a crime would decide to interrupt his/her career by going to prison, knowing full well that evidence has been planted that will eventually exonerate him/her. Why go through that?”

May 9, 2012by Jeffrey Wells3 Comments
« Previous post
Can Frears Get It Up?
Next post »
Shadows: “A Weak Joke”