Cristian Mungiu‘s Beyond The Hills screened at the Salle Debussy twice this evening, at 7 and 10 pm. I caught the 7pm with a capacity crowd. It’s an intensely austere, moralistic, monastic and harsh-atmosphere thing with repressed Sapphic undertones and all kinds of authoritarian foulness and constipation. The slowly building film observes the tyranny of religion and considers the inevitable result of trying to keep long-building steam from escaping the pot. 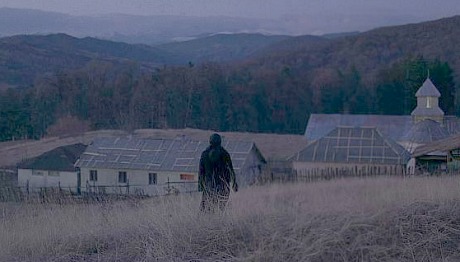 Mungiu’s screenplay is based upon a 2006 book called “Deadly Confession” by Tatiana Niculescu Bran, which is based on true events. Boiled down, it’s about love denied and an improvised exorcism gone wrong. It’s about two female friends, Voiochita and Alina (Cosmina Stratan, Cristina Flutur), who grew up together and became lovers in an abusive state orphanage, and who are reunited when Alina comes to visit Voichita, who has become a nun at a remote and highly primitive convent in rural Romania.

It’s basically about Alina wanting Voichita to be her lover again and perhaps even get her to abandon the convent and leave with her, and when Voichita refuses it’s about Alina deciding she wants also to submit to the discipline and denial of a monastic life but not really — she just wants to cling to Voichita under any circumstance. These currents are soon decipherable, of course, and the priest and the nuns to what they can to head them off at the pass if not squelch them, and eventually things turn manic and loony and then violent. It all turns out very badly.

Tweet summary: “Cristian Mungiu’s Beyond The Hills is a long, somewhat downerish Bresson film about faith, blockage, monastic ritual and denial, love, insanity, eroticsim, exorcism & the evil one. Very austere, muffled and forbidding. Vaguely creepy, chilly, very slow and deliberate. Disturbing but it doesn’t really pay off. And yet it sort of does. Could or would the ascetic Bresson have made Beyond The Hills? And if he had, would his God have been pleased, angry or non-plussed?”

It’s very well acted by everyone, top to bottom. I believed every second of it.

When the 7pm show came to an end two or three people mooed. Not booed but mooed like cows in the field. I’ve heard boos in Cannes before and these were not that.