I thought at first that the recent daring escape from house arrest by blind Chinese civil-rights lawyer and activist Chen Guangcheng in China’s rural Shandong Province might be the beginning of a good political thriller. Especially after Chen slipped into Beijing and was taken into the U.S. Embassy on humanitarian grounds. It’s at least an HBO film, I told myself. Every viewer would be rooting for Chen’s escape, and for the safety of his family. And Christian Bale could play himself in a cameo. 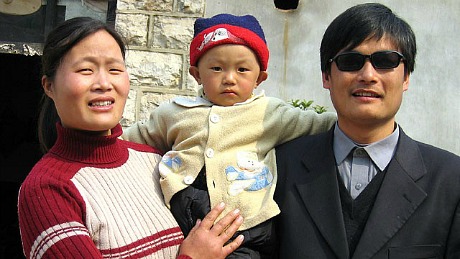 But when Chen told U.S. officials he didn’t want political asylum in the U.S. and that he wanted to stay in China and grapple it out with Chinese authorities, he showed himself to be astonishingly naive if not stupid about what would likely happen to him and his family.

And then he changed his mind and said he wanted a haven in the U.S., but only after he’d been transferred to a Chinese-run Beijing hospital for treatment of a broken foot sustained during his escape, with Chinese goons surrounding him. And then he told The Daily Beast‘s Melinda Liu that he was scared and begged to be allowed to leave China on Secretary of State Hillary Clinton‘s plane.

Heroes of political persecution thrillers are never naive about their situation or the mentality of their oppressors. They might ultimately win or lose their battle, but they never say in the middle of Act Two, “I don’t want asylum…I’ll tough it out and appeal to the humanity of the authorities and continue to fight the good fight in my native country” and blah blah. And they never cry about how scared they are after they’ve finally wised up.

Remember Steve McQueen‘s Jake Holman in The Sand Pebbles? He wasn’t educated, but he knew what the Chinese communists were about. He was no fool. Right now that’s exactly what Cheng seems to be — a fool, and a weepy one at that. He had a chance (or at least a shot at a chance) and he blew it.

There are also indications that U.S. diplomatic officials in Beijing, fearful of a major row with the Chinese government, might be willing to throw Chen under the bus. A 5.2 N.Y. Times report about his escape, temporary asylum and hospitalization says that “he was…spooked by the presence of plainclothes [Chinese] police officers at the hospital” and that “it did not help that United States officials had gone home for the evening.”

What kind of a supposed good-guy official in a political thriller goes home for the evening with a hot-potato political activist in a hospital under the control of the bad guys?

“Many Americans were with me while I checked into the hospital and doctors examined me…lots of them,” Chen told Liu from his hospital bed. “But when I was brought to the hospital room, they all left. I don’t know where they went.” Obviously they were told to stand down.

Liu writes that “U.S. officials…said they had reached an understanding with Chinese authorities that Chen would be allowed to pursue his education in a location away from his home province of Shandong, to follow up on his work as a self-taught ‘barefoot lawyer.'”

Yeah, but what are they going to do about it? It’ll be a very bad thing if the Obama administration allows Chen-the-lamb to be surrounded and nipped at and possibly eaten by the wolves. The symbolism of will give Romney and the right a potent issue.