Four days ago I noted that a press release about Warner Home Video’s upcoming release of a 3D Bluray of Alfred Hitchcock‘s Dial M for Murder (streeting on 10.9) didn’t say if the aspect ratio will be “Furmanek-ed at 1.85, or if WHV will go with the 1.33 or 1.37 aspect ratio that audiences have been watching on TVs and DVDs and in revival houses for the last 55 years or so…I’m guessing it’ll be the former.” 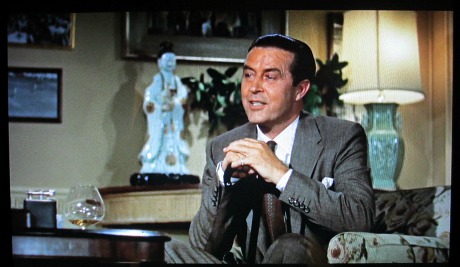 Well, I rented a high-def version of Dial M on iTunes last night, and it’s 1.85, all right. Or 1.78. That pretty much makes it official, if you ask me — the Furmanek forces are calling the shots, and HE’s “boxy is beautiful” and “let the image breathe with more head space” philosophy has been discounted. And as for Robert Harris‘s suggestion that this superb 1954 murder thriller would probably look best at 1.66….naaaah!

Eff you very much, guys. I guess I’m what you might call a sore loser, huh? If there was such a thing as a French underground fighting the 1.85 fascists, I would join up today.