“I Was Cured, All Right”

“I look at these huge movies that come out, and some of them are really, really impressive [but] I think I couldn’t do it,” Magic Mike director Steven Soderbergh recently told Miami Herald critic Rene Rodriguez. “Haywire was really fun to do. I was stretching in a way I was comfortable with. Even though Contagion may not appear that way, it was really fun to make too. That’s all that motivates me now. After Che, I have no desire to make another quote-unquote important movie. I’ve been cured of that.” 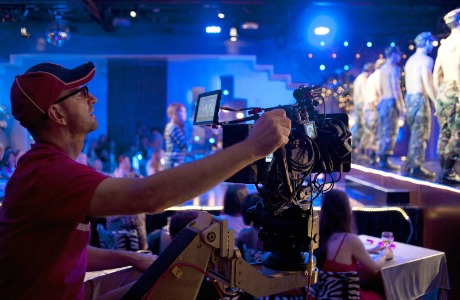 In other words, the ‘meh’ reception to Che broke his heart. In response to which Soderbergh began to say to himself, “You know that? Eff this shallow culture that refuses to at least consider and appreciate to some degree something that I know is real and solid and true. I can find more spiritual fulfillment in another line of art.”

“But since Che, Soderbergh has remained as prolific as ever,” Rodriguez writes. “He’s directed several films including Contagion and Haywire. The Bitter Pill, his follow-up to Magic Mike, is already wrapped, and he’s currently preparing to direct Behind the Candelabra, a biopic of the famed pianist Liberace starring Michael Douglas and Matt Damon.

“So what gives? Here’s what Soderbergh said about his recent career choices and why he’s been working on noticeably lower budgets and smaller scales.

“‘In retrospect, the most frustrating thing about Che was that the quality of the discussion wasn’t where I had hoped it would be. It broke out so obviously along ideological lines and nothing else was discussed. I always knew it would be a polarizing movie. I just thought there would be a more wide-ranging discussion.

“After that, I’ve been consciously looking for things that would be more fun to do. With Contagion, I was trying to push into a genre category as far as I could. Even though it came out in the fall, I didn’t want it to feel like important Oscar-bait. I wanted to make something really entertaining. As far as the smaller scale goes, that hasn’t necessarily been by choice.

“I was fired off Moneyball [he was replaced by Bennett Miller] and then got sort of shoved off The Man from U.N.C.L.E.. Those movies were on a larger scale. Contagion was $60 million. When I was on it, Moneyball was $50 million. When you get into those kinds of numbers, the amount of time you spend doing the things you like to do decreases. I like being in a room with actors. But when the scale of a film grows, you are forced to wrangle with a bunch of other elements. And that’s not fun for me.”

A $50 Sears gift certificate to anyone who can identify the source of the headline. No, make it $25.

June 24, 2012by Jeffrey Wells29 Comments
« Previous post
What Writer Doesn’t Recycle?
Next post »
Stand By Your Own