The very-good-when-she-was-good Nora Ephron died yesterday at age 71 — hugs and condolences to friends, family, fans. A blood disorder rooted to lukemia, and a shock (nobody outside Ephron’s immediate circle seemed to know it was coming) and very sad — she left way, way too early. But she lived a very full life and experienced the kind of excitement and fulfillment and creative satisfaction that many of us only dream about. 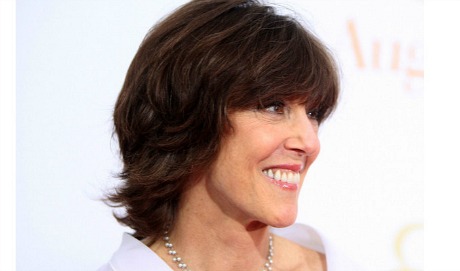 I always think of Bob Dylan‘s line about “death’s honesty” when someone goes. That’s what it is, all right — honest. But keep your distance, pal.

Ephron was an expert, witty, self-deflating writer of a neo-feminist slant. Her best years in this vein began in the late ’60s as a journalist-essayist. Her ’70s articles in particular (largely about food, sex, life in Manhattan) were really, really good — amusing, cutting, confessional, clever. Her screenwriter mother Phoebe once told her that “everything is copy”, and she certainly seemed to have followed that rule. Yes, some of Nora’s ruffs and bon mots were mean at times, but if you’re worried about pissing people off you’ve no business being a writer. Ephron had her voice, and no one can ever take that away.

While married to Watergate reporter Carl Bernstein Ephron and he did a re-write of William Goldman‘s All The President’s Men script, and if I’m not mistaken at least one of their scenes made it into that 1976 film — the one in which Dustin Hoffman (as Bernstein) fakes out the chilly, brittle secretary of Dade County investigator Martin Dardis (Ned Beatty) by calling and pretending to be some guy in the County Clerk’s office who needs some records picked up that Dardis wants, etc.

That was a really good scene, and on the strength of it and the screenplay Ephron got a screenwriting gig for a TV movie, and eventually a ticket into the movie bigtime. The ’80s were great for her.

And then came her screenplay of Heartburn (’86), which was based on her book of the same name about her marriage to Bernstein and the infidelity that led to their breakup. The Mike Nichols-directed film was quite satisfying during the first half, and less so during the second. The ending was flat.

For me Heartburn was the first movie that told me that Ephron, good as she was, was unwilling to step outside of her well-tended box. She couldn’t seem to admit to any kind of marital failing on the part of her stand-in character, Rachel Samstat (played by Streep), and that was trouble.

As I wrote a few weeks ago after re-watching the film, “The problem is that Jack Nicholson‘s affair with the unseen giraffe lady with the big splayed feet (inspired by Bernstein’s affair with Margaret Jay) happens entirely off-screen and reveals nothing at all about Nicholson’s psychology. All you can sense is that he feels vaguely threatened by fatherhood and responsibility. It just feels bizarre that the affair just happens without the audience being told anything. Nicholson’s Mark is just a selfish shit (which may well have been the case except it takes two to bring a marriage down), and I felt bothered and irritated that I wasn’t getting the whole story.”

And then then came her much-beloved screenplay for When Harry Met Sally (’89), which included that famous Meg Ryan orgasm scene in the diner. That and the film’s nicely-woven emotionality solidified Ephron’s rep as the seasoned go-to lady for romantic comedies, and she was more or less set for life…as far as anyone who lives by their wits and the task of catching and condensing ephemeral pollen can have anything “set.”

Ephron’s first directing effort, This is My Life, a dramedy about a mom (Julie Kavner) who works nights as a stand-up comic, was a critical and box-office dud. But her next film, Sleepless in Seattle (’93), was a huge hit, and was reasonably well handled for the most part. But — sorry but I think it’s true — after that it was all downhill as far as Ephron’s mise en scene-ing was concerned. For she had stepped into another box — that of the highly-paid hyphenate who could presumably deliver sharp, well-sculpted romantic comedies that connected with women and men alike — and the demands of that business or that genre plus her inability to really dig in and go for the challenge and somehow deliver soulful relationship meals in an ’80s and ’90s James L. Brooks-like vein….I don’t know what happened exactly, but it was all diminishing returns, or so it seemed to me.

Mixed Nuts (’94), Michael (’96), You’ve Got Mail (’98), Lucky Numbers (’00), Bewitched (’05) and Julie & Julia (’09) — none of them really worked. And yet I was mostly okay with the screenplay she co-wrote with her sister Delia for Hanging Up (’00), a Diane Keaton-directed film about three sisters (Keaton, Meg Ryan, Lisa Kudrow) coping with the death of their cantankerous dad (Walter Matthau).

N.Y. Times critic Manohla Dargis was pretty rough on Ephron in this December ’09 interview with Jezebel.

The last time I heard Ephron speak was during a 4.18.09 tribute to Mike Nichols panel at the Museum of Modern Art. She and three of Nichols’ legendary collaborators — Streep, Elaine May and Buck Henry — delivered a “moderately dazzling, often funny, at times chaotic group discussion,” I wrote, “like a spirited dinner-table thing between Uncle Mike and the in-laws…a nice, raggedy, catch-as-catch-can vibe.” Here’s the mp3. Really good stuff.

Here’s a portion of an introduction that Ephron wrote for the Kindle version of her last book, “I Remember Nothing””

“When you’re young, you make jokes about how things slip your mind. You think it’s amusing that you’ve wandered into the kitchen and can’t remember why. Or that you carefully made a shopping list and left it home on the counter. Or that you managed to forget the plot of a movie you saw only last week.

“And then you get older.

“Anyway, at some point, I thought it might be fun to write a book about what I remember, and what I’ve forgotten. I still feel bad about my neck, but I feel even worse about the fact that huge bits of my life have gone slip-sliding away, and I thought I’d better write them down while I still had a sense of humor about it all.”

411’s Roger Friedman has posted another portion in which Ephron lists the things she’ll miss when she’s gone:

“My kids, Nick [Pileggi, her husband), Spring, Fall, waffles, the concept of waffles, bacon, a walk in the park, the idea of a walk in the park, the park, Shakespeare in the Park, the bed, reading in bed, fireworks, laughs, the view out the window, twinkle lights, butter, dinner at home just the two of us, dinner with friends, dinner with friends in cities where none of us lives, Paris, next year in Istanbul, Pride and Prejudice, the Christmas tree, Thanksgiving dinner, one for the table, the dogwood, taking a bath, coming over the bridge to Manhattan, pie.”