Either you get it or you don’t. But if you get it, you might incur the wrath of the complacent cows in the field. Consider first this June 17, 1960 review of Alfred Hitchcock‘s Pyscho by N.Y. Times critic Bosley Crowther — perhaps the most fuddy-duddy-ish review of Hitchcock’s classic ever written: 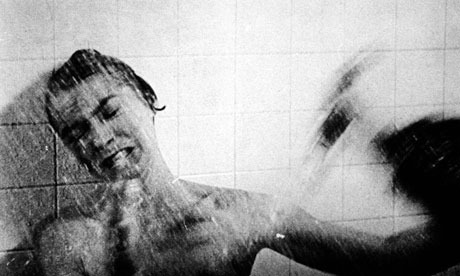 “You had better have a pretty strong stomach and be prepared or a couple of grisly shocks when you go to see Alfred Hitchcock’s Psycho, which a great many people are sure to do. For Mr. Hitchcock, an old hand at frightening people, comes at you with a club in this frankly intended blood-curdler, which opened at the DeMille and Baronet yesterday.

“There is not an abundance of subtlety or the lately familiar Hitchcock bent toward significant and colorful scenery in this obviously low-budget job. With a minimum of complication, it gets off to a black-and-white start with the arrival of a fugitive girl with a stolen bankroll at an eerie motel.

“Well, perhaps it doesn’t get her there too swiftly. That’s another little thing about this film. It does seem slowly paced for Mr. Hitchcock and given over to a lot of small detail. But when it does get her to the motel and apparently settled for the night, it turns out this isolated haven is, indeed, a haunted house.

“The young man who diffidently tends it — he is Anthony Perkins and the girl is Janet Leigh — is a queer duck, given to smirks and giggles and swift dashes up to a stark Victorian mansion on a hill. There, it appears, he has a mother — a cantankerous old woman — concealed. And that mother, as it soon develops, is deft at creeping up with a knife and sticking holes into people, drawing considerable blood.

“That’s the way it is with Mr. Hitchcock’s picture — slow buildups to sudden shocks that are old-fashioned melodramatics, however effective and sure, until a couple of people have been gruesomely punctured and the mystery of the haunted house has been revealed. Then it may be a matter of question whether Mr. Hitchcock points of psychology, the sort of highly favored by Krafft-Ebing, are as reliable as his melodramatic stunts.

“Frankly, we feel his explanations are a bit of leg-pulling by a man who has been known to resort to such tactics in his former films.

“The consequence is his denouement falls quite flat for us. But the acting is fair. Mr. Perkins and Miss Leigh perform with verve, and Vera Miles, John Gavin and Martin Balsam do well enough in other roles.

“The one thing we would note with disappointment is that, among the stuffed birds that adorn the motel office of Mr. Perkins, there are no significant bats.”

And now this Village Voice review by Andrew Sarris, published a week or so later:

“For many years American and British critics have been mourning the ‘old’ Alfred Hitchcock who used to make neat, unpretentious British thrillers before he was corrupted by Hollywood’s garish technical facility. Oh, for the days of The Thirty-Nine Steps, The Man Who Knew Too Much and The Lady Vanishes! Meanwhile in Paris the wild
young men on Cahiers du Cinema, particularly Claude Chabrol, were proclaiming the gospel that Hitchcock’s later American movies stamped him as one of the screen’s major artists.

“A close inspection of Psycho indicates not only that the French have been right all along, but that Hitchcock is the most-daring avant-garde film-maker in America today.

“Besides making previous horror films look like variations of Pollyanna, Psycho is overlaid with a richly symbolic commentary on the modern world as a public swamp in which human feelings and passions are flushed down the drain. What once seemed like impurities in his patented cut-and-chase technique now give Psycho and the rest of Hollywood Hitchcock a personal flavor and intellectual penetration which his British classics lack.

“For one thing, Hitchcock no longer cheats his endings. Where the mystery of Diabolique, for example, is explained in the most popular after-all-this-is-just-a-movie-and-we’ve-been-taken manner, the solution of Psycho is more ghoulish than the antecedent horror which includes the grisliest murder scenes ever filmed.

“Although Hitchcock continually teases his conglomerate audience, he never fails to deliver on his most ominous portents. Such divergent American institutions as motherhood and motels, will never seem quite the same again, and only Hitchcock could give a soft-spoken State Trooper the visually sinister overtones of a dehumanized machine patrolling a conformist society.

“Despite its huge grosses, Psycho makes fewer concessions to popular tastes than an allegedly daring film like Private Property. Psycho takes its audience wherever its director wants to go, while Private Property stays a little ahead of the audience until catching-up finale worthy of Albert Zugsmith.

“In its treatment of outrageous perversion as a parody of an orderly social existence, Psycho has a certain affinity to a modern theatre piece like The Connection in which the audience is forced to respond to its own hypocrisy in making the conventional moral distinctions

“Psycho should be seen at least three times by any discerning film-goer, the first time for the sheer terror of the experience, and on this occasion I fully agree with Hitchcock that only a congenital spoilsport would reveal the plot; the second time for the macabre comedy inherent in the conception of the film; and the third for all the hidden meanings and symbols lurking beneath the surface of the first American movie since Touch of Evil to stand in the same creative rank as the great European films.”