Zermatt Can Bite Me

Ever since seeing my first image of the Matterhorn when I was eight or nine I’ve wanted to stand in its shadow and just go “whoa.” So yesterday the guys and I drove the wrong way (i.e., four hours over winding mountain roads) from Lauterbrunnen to Zermatt, the affluent ski town that lies at the base of it. The trip turned out to be mostly a disaster. Because of an innocent mistake I almost got slammed with a 350 Swiss franc traffic ticket — thank God I was able to talk my way out of it. 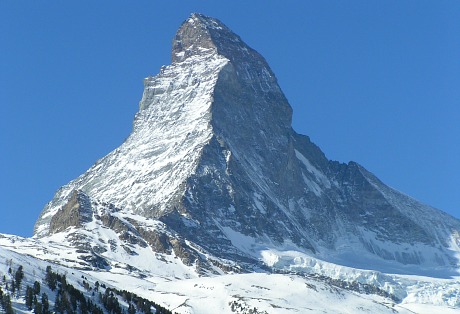 The signs on the long and winding approach to Zermatt fail to explicitly point out a basic fact — you can’t drive into town unless you’re a resident or a cab driver or a city worker. You have to park in Tasch, an ugly little settlement about six kilometers north of Zermatt, and take a train or a taxi in. Fine, no problem, but there are no signs that clearly say this, and certainly none in English. When I see a sign that says “park here,” I say to myself, “Okay, that’s an option, fine. It’s not something I necessarily intend to do as I am the sole master of my fate, but it’s nice to know it’s there.”

HE suggestion to Zermatt brainiacs: The words “Non-resident passenger vehicles are not allowed in Zermatt” would definitely be understood if you said as much on a road sign. Or how about an image of a car with a big red X or a circle slash across it? Idiots.

A well-fed Zermatt cop in his 30s pulled me over and explained the rules. He asked how I could have missed the sign that explains about parking in Tasch and taking the train or a cab, etc.? I didn’t want to argue by telling him that the traffic-sign people are imbeciles so I just said I’d made an innocent mistake. “You have to pay a fine of 350 francs for this!,” he declared in English. I could have done a Harvey Keitel-as-Mickey-Cohen-in-Bugsy and said, “Does that come with a blowjob?” But I held myself in check, took a breath and said, “Well, I don’t think that’s very fair. I don’t read German very well and while I fully accept and respect the laws here, I just didn’t realize that driving into Zermatt was 100% verboten…really, honest mistake.”

The cop could have said “tough shit” and fined me anyway, but for some reason he took pity and let me skate…whew.

The guys and I felt so turned off this episode that we decided to just flush that awful town out of our systems and drive to Bern instead.

HE to anyone in Europe who’s flirting with seeing the Matterhorn up close: Don’t. Not worth the hassle. Eff Zermatt.