HE reader “Film Buff” (a.k.a. “CH”) has passed along two complaints about alleged substandard 3D presentation of The Amazing Spider-Man at the Arclight Dome — his own and one from a guy named “Spleen” who posted on Yelp. 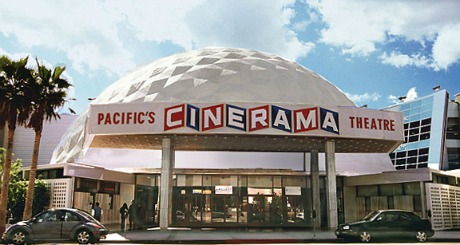 “Maybe I’m crying over spilt milk, but the experience I had at the Arclight Dome yesterday [on Wednesday. 7.4] was awful,” Film Buff writes, “and I kind of had a hunch that I wasn’t the only one. That’s why I searched Cinema Treasures and Yelp reviews to see if anyone had similar issues the week at the Arclight and what do you know — Spleen’s review on Yelp from a day before confirmed it.

“The Spider-Man 3-D I saw at the 11:00 am showing at the Arclight Dome on 7.4 looked flat and awful, barely any 3rd dimension whatsoever. I know a few people walked out to complain, and that when the film was over I asked people around me what they thought of the 3D and they were in agreement that something was off about it, that it looked terrible.

“It took me forever to track down a manager at the Arclight after the show. When I complained about the sub par 3D, she gave me every ridiculous excuse in the book — (a) “Our 3D looks different then other theatres 3D because we use a different system”, (b) “No, you are wong because studio reps drop by and check our system all the time,” and (c) “It was the filmmaking that made it look that way, not us — they filmed it like that.” That last line was classic — blame Marc Web for our subpar 3D! I had to argue with this lady for a good five minute because I’ve seen plenty of 3D films in my time over the last several years and my eyes can spot a piss poor 3D presentation a mile away.

“The Arclight charging 19.50 ($16 for seeing the film on a “holiday”, or weekend plus the 3.50 3D surcharge) for subpar godawful 3D is appalling. Their standards have clearly gone down in the last year or so.”

Here’s Spleen’s rant with edits: “I caught Spider-Man at the Dome in 3D yesterday morning. It had just opened midnight the night before, so they should’ve been on their A game. Nope. They brought in Team Not My Problem for this event, taking their ‘I don’t give a damn’ pills. The 3D was jacked. I went out in the lobby twice to tell them, and so did other people. I overheard one of the Arclight employees come in, watch a little bit of it and exclaim with a ‘why me’ sigh, ‘It looks fine to me.’ Go make some popcorn, doll. You’re obviously part of the problem.

“Eventually (around 20 minutes into the film) the manager stopped the movie and apologized. The crowd kind of became insensitive jerks about it and gave him a hard time. Come on, people, sometimes things don’t work out. Your reaction should be more, ‘Aw, shucks this is a bummer.’ Not a chance to put this man’s qualifications up for review. But, then after about five minutes of waiting they got everything reset and back on.

“Some of the issues with the 3D were fixed, but then I immediately noticed something new: the 3D was flipped with the background elements in the foreground and vice versa. That was it for me.

“Anyway, I mentioned that the 3D was switched to at least three different Arclight employees hoping they’d alert someone asap and fix it for the poor hapless saps still watching the movie in the Dome, but nary a one had a single fuck to give. One lady even said to me, ‘Well, someone alert the media.’ That one took me by surprise, because I didn’t realize it until later that not only was she conveying her absolute disinterest for their moviegoing experience in general, but also that I was Captain Overreaction for mentioning it.

“That’s mainly why they’re getting the 4 stars and not the 5. But on a positive note, the second screening of Amazing Spider-Man in 3D in Cinema 7 looked great!”