7.17 Update: My assertion in this piece, which posted on Monday, 7.16, that a previous DVD of Rosemary’s Baby was issued at an aspect ratio of 1.66 to 1 is incorrect. The rest of this article is fine. I’ve addressed the wrongo in a piece that ran Tuesday, 7.17, called “Limited Mea Culpa.” 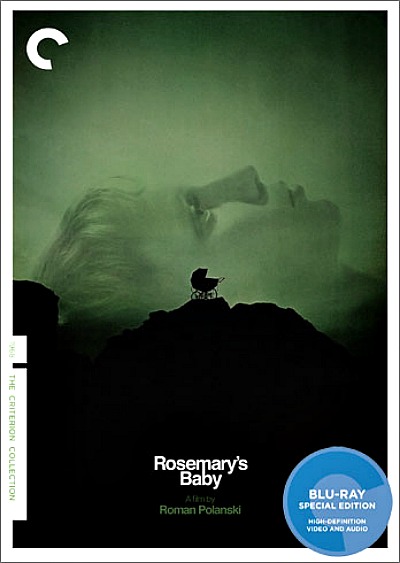 Original 7.16 article: Today the Criterion Collection announced that, as rumored, they’ll be releasing a new Bluray/DVD of Rosemary’s Baby (’68), based on a high-definition digital restoration approved by director Roman Polanski. And the aspect ratio — hold on to your hats — will be 1.85…Jesus! I feel like I’m Rosemary Woodhouse on my bed with a scaly Satan lying on top of me, and I’m going “this isn’t a dream…this is really happening!”

The Rosemary’s Baby Bluray won’t be masked at 1.66, which has been the reigning aspect ratio for decades, certainly on the last DVD and on the laser disc before that. And not 1.78, which would perfectly fit the 16 x 9 screen. No — Criterion had to go full-fascist and adhere to the 1.85 aspect ratio that all films have been “officially” screened at commercially in the U.S. since April 1953.

If Rosemary’s Baby had been released in Great Britain, we would today be looking forward to a 1.66 version from Criterion next October. John Schlesinger‘s Sunday Bloody Sunday (’71) was also announced today as a Criterion Bluray release, and it will be masked at 1.66.

I’m horrified that Polanski, who shot 1965’s Repulsion at 1.66 (and was presented at that a.r on Criterion’s Bluray) and clearly shot Rosemary’s Baby with a 1.66 a.r. in mind — the DVD shows that each and every frame is exquisitely composed at that particular shape — has apparently approved the meat-cleavering of his own film! Criterion’s statement that he “approved” this new Bluray obviously indicates that Polanski has told Criterion “sure, go ahead, whack off the tops and bottoms…fine with me!”

I’m purple-faced with rage. I’ve got stomach acid. I’m spitting saliva on the rug. Why am I, sitting at a desk in West Hollywood, trying to protect and defend Rosemary’s Baby as it ought to be seen while its director sits in Paris, shrugging his shoulders and saying “whatever”?

On 3.21.12 I wrote that Polanski “is a European traditionalist at heart, and while he knew that the film would be projected at 1.85 by U.S. exhibitors, per the standard, I strongly suspect that he composed it for 1.66. Look at the 1.66 version of the film that William A. Fraker shot. There are no acres of space above anyone’e head. It’s perfect at 1.66. It’s just right.

It’s not just me claiming that 1.66 is the preferred aspect ratio, and that precedents have been established. 12 years ago DVD Talk‘s Geoffrey Kleinman noted that a 2000 DVD version presented the film at 1.66 to 1. Some wingnut at Turner Classic Movies declared a few years back that Rosemary’s Baby‘s aspect ratio is 1.66. And a commenter at Velocity Reviews asked a while back why Polanski’s film was completely occupying a 16 x 9 screen when a 1.66 a.r. would dictate windowbox bars on the side.

I know how this one is going to go. The fascists are going to carpet-bomb me with their usual goose-stepping crap and I’m going to respond with my usual counter-accusations, etc. It’s an old hymn. I’m no fan of Roman Polanski today, let me tell you. How could he do this to his own film?

The clip below is seemingly cropped at 1.85. It’s not catastrophic, but it’s obviously a bit too cramped. It doesn’t breathe. The framing feels confining.