There’s no question that the great Ernest Borgnine, who died today at age 95, peaked in the mid ’50s. His Oscar-winning role as Marty the homely butcher in Marty (’55), was the pinnacle, closely followed by the sadistic Fatso Judson (“I’m gonna cut this wop’s heart out…anybody steps in I give it to ’em first!”) in From Here to Eternity (’53). 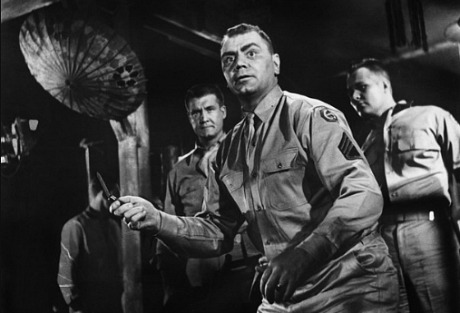 Borgnine also cashed in with McHales’s Navy, the TV series that ran four years (’62 to ’66), and two or three years later he got lucky with the best western role of his career — Dutch Engstrom in The Wild Bunch (’69). “Lucky” is the sense that Sam Peckinpah cast him, I mean — not in the delivery of the character, which was all about skill and finesse.

Borgnine’s third-best ’50s role was Ragnar in The Vikings (’58), particularly the scene in which he jumps into the wolf pit with a sword in hand (“Odaaahhhnn!”). Followed by his villains in Bad Day at Black Rock, Johnny Guitar and (yes) Demetrius and the Gladiators. He was also half-decent as Lucius, a Roman tribune/whip-cracker/something-or-other in Barabbas.

He was also pretty…make that very good in Robert Aldrich‘s The Flight of the Phoenix (’65) and The Dirty Dozen (’67), and he was direct and vulgar as a Hollywood something-or-other in The Oscar. I forget what kind of Hollywood guy he played in Aldrich’s The Legend of Lylah Clare (’68), but he was oppressively grotesque in that also. Not Borgnine’s fault — the film was painful to sit through, and horribly written — because he gave it all he had. He always did. But Borgnine was best when he was told to hold back.

And let’s not forget Airwolf, the early-to-mid ’80s TV series in which he costarred with Jan Michael Vincent and Alex Cord. Actually, I had forgotten Airwolf — it took a friend to remind me.

Borgnine made a ton of crap, of course, but he kept working, kept on plugging, kept on being Borgnine. We should all live so long, or enjoy lives as memorable, interesting, joyful, etc.

Here’s a rememberance by The Hollywood Reporter‘s Scott Feinberg.