I’ve seen Susan Lacy‘s Inventing David Geffen, an “American Masters” documentary that will air on PBS on 11.20.12. It’s a somewhat candid backrub piece that pretty much allows the 69 year-old supermogul to tell his life story the way he wants it told. Which feels okay as you’re watching it, I guess. It doesn’t excite but doesn’t offend either. And I watched it twice in a row, which says something. 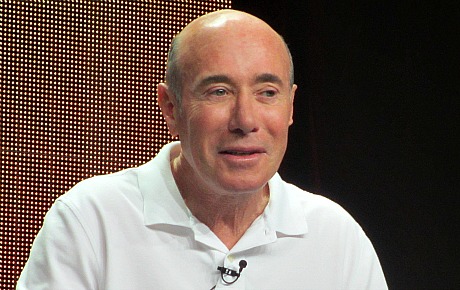 David Geffen during Sunday’s PBS-arranged q & a at the Beverly Hilton hotel.

Lacy includes an occasional blunt comment (one-time litigant Neil Young shares a few choice phrases) about Geffen’s combative nature and scrappy business dealings so as to give a feeling that the doc doesn’t “flatter,” but it mostly does flatter in a sense because it underlines how an awful lot of people are scared of Geffen, and therefore respectful. They all kiss the ring.

Lacy’s doc is an engrossing sit because Geffen is a fascinating player, full of emotionality (some of it angry and combative) and contradictions and humor and fierce will. As a columnist I love rich hardballers (Geffen is worth over $5 billion) who are tough and know all the angles and how to play everything to their advantage, but Lacy’s doc is not about that territory. Not really. Inventing David Geffen is an agreeable thing, nostalgic for the ’60s and ’70s, flavorful and amusing at times and “honest” as far as it goes but basically friendly and affectionate. Lacy obviously likes Geffen, and after watching her film it’s hard not to feel the same. He’s a kick, he’s been around, he’s lived it, he knows everyone.

But if after seeing this film you want a less varnished portrait that’s probably closer to the real deal, dust off the late Tom King‘s 2001 biography — “The Operator: David Geffen Builds, Buys and Sells The New Hollywood.” Now that had real juice and adrenalin and aroma and nerve, you bet. Geffen hated it, calling it a hatchet job and conniving and agenda-driven, but if you read Lisa DePaulo‘s June 2001 New York article about how King and Geffen’s relationship began amiably with a written agreement to give King access and then deteriorated and got worse and worse until everything was poison, it’s hard to accept Geffen’s view that King just set out to trash him with little regard for truth or fairness or appropriate journalistic standards.

In any event Geffen attended a PBS press event Sunday at the Beverly Hilton to help promote Lacy’s doc. Most if not all of the journalists present had been given a DVD screener so it was all (a) questions about this and that and (b) the notoriously guarded and press-shy Geffen answering them as briefly and curtly as possible. Here’s an mp3 of the discussion. Here‘s how Deadline covered it. And here are my favorite quotes and exchanges:

“I’m not involved in DreamWorks at all,” Geffen said early on. I asked if that meant that he hasn’t seen Steven Spielberg‘s Lincoln, and he said he hasn’t “but I hear it’s wonderful.” I asked if he knows how long it is, and he said, “I have no idea.” 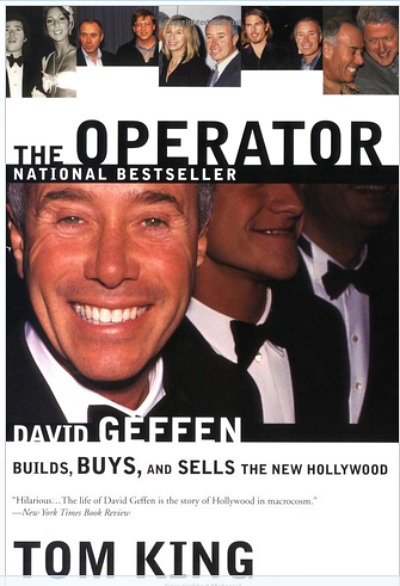 “Failure is a great motivator,” Geffen said at the start of the session. (He could have said “there’s no success like failure, and failure is no success at all” but that’s taken.)

“Why were you driven?,” a journalist asked him. Geffen smirked and said, “Meet my mother.”

Asked to talk about Jewish background and how Judaism and the culture of Jewish guilt may have influenced him early on, Geffen said this: “My mother came to America from Palestine in 1931. My father met her in Palestine. They were socialists, really. I was Bar Mitzahed but we didn’t have much of a religious life. Does that not answer your question?” The journalist asked again about childhood influences and Geffen said, “Everybody’s childhood is an influence about what happens in their future, don’t you think?”

A journalist asked what Geffen might do if he was trying to get into the music business today (or words to that effect) and he said, “I’d kill myself.” What he meant is that he couldn’t abide what he sees as a lack of spirituality in today’s business. “When I was a kid all my peers wanted to play guitar and be in a band,” he said. “Today if you re growing up today your’e not as focused on the music business as much as being a programmer…that’s where success seems to lie.”

Putting together $1.8 billion to finance DreamWorks, which he did in the space of two weeks back in ’94, “would be impossible today,” he said.

“You find yourself getting old and bald…”

After Geffen was mistakenly diagnosed as HIV-positive in the early (or was it the mid?) ’80s, “I just stopped working,” he said. “Here I am, I thought. I’d been working all my life and made all this money and didn’t have any fun really. Didn’t get high. So I’m gonna get high and get laid. People were dropping like flies in the ’80s. A very scary period of time. I like working. I’ve always worked, always enjoyed, always thought it was fun going to the office.

“Has anyone ever said no to David Geffen?,” he was asked. “Of course, there were many,” he said. “I wanted REM. I can’t think of which ones.”

Asked about this reported interest in buying either the NY Times or LA Times, Geffen said he “was not looking to be a newspaper owner as an investment…I was going to buy the NY Times out of my foundation and make it a non-profit. Because I think the NY Times is essential. A very important newspaper. It’s very hary hard to survive as regional or logcal newspaper todaty. The NY Times and the Wall Street Journal are national newspapers.” 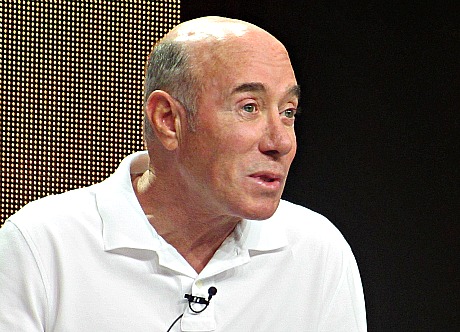 A journalist said that “a few years ago Carly Simon outed you as the guy she wrote about…” and right away Geffen cut him off. “That’s simply not true,” he said. “I’m not saying I’m not vain, but I’m not her vain. I thought the same thing about that as I thought about my marrying Keanu Reeves, whom I’ve never met.”

He said he’d “had no input into this film, honestly,” referring to Lacy’s doc. “I had nothing to do with the makeup of those questions. I wanted to tell the story as accurately as I can. I had no idea what this was gonna be. I didn’t think I was a good candidate for this thing. But I was happy with it.

“I’m proud of all the things I’ve done,” he said. “I [see] this film and I think, “wow, you did have all that.” I don’t think about the past. I think about what I’m doing now. I really don’t reflect on my career. I don’t like to talk about myself. I avoid it as much as possible. When I saw the film, I thought ‘wow’…I was impressed.”

A journalist asked what gets him up in the morning. “Whatever I’m gonna do,” he replied. “I like talking to interesting people. Reading great books. I can read four or five books a week. I don’t carry a cell phone. I’ve never texted anyone in my life. I’ve never [used] an ATM machine…or whatever it is.”

“Was that your key to success, being the smartest man in the room?,” a woman asked. “I never thought I was the smartest man in the room,” Geffen answered. “I really did very poorly in school. I thought I was dumb. I think other people thought I was dumb too. I had any number of jobs I was fired from, between high school and when I got to the William Morris Agency [in ’64]. And I got to WMA and I was delivering mail, and I heard the agents talking on the phone [in their offices] and thought to myself, ‘Oh, they’re bullshitting on the phone. I can do that.'”

By the way: Tom King, whom I knew slightly and liked as far as it went, died at age 39 in mid April 2003. Here’s the L.A. Times obit. Here’s a link with my own response to his passing.)

July 22, 2012by Jeffrey Wells30 Comments
« Previous post
It Was Holmes All Along
Next post »
Sunday and Rosemary Do Lunch