If this were my map I would throw out Fast Times at Ridgemont High as the fill-in for California (what an insult!…as if California is full of adolescent stoner mallheads), and replace it with either (a) Jacques Tourneur‘s Out Of The Past, which encompasses San Francisco, Los Angeles, Bridgeport and Lake Tahoe (as well as New York and Acapulco), or (b) Karel Reisz‘s Who’ll Stop The Rain, which encompasses Oakland, Berkeley and Los Angeles. 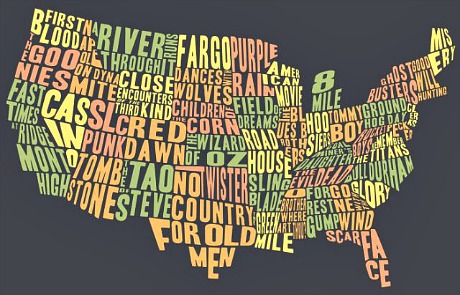 I’d like to see a much bigger map that gets much more specific and which assigns movie titles to particular towns and/or blends their names (like, let’s say, The Wild One and Hollister, California, where the original 1947 motorcycle-gang riot that inspired the 1953 Marlon Brando film).

The Movie Map reminds me of the one that accompanied Joel Garreau‘s The Nine Nations of North America, which came out in 1981. Question: Do the same nations exist 30 years later, or have the borders shifted to some degree? Do the same names apply? 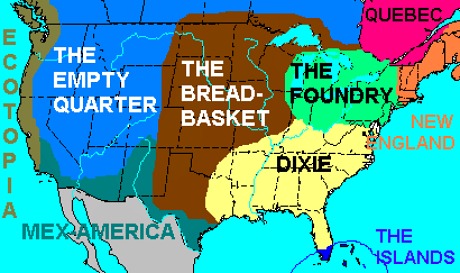