I’ve been meaning to complain about two elements in Don Winslow and Oliver Stone‘s Savages, although the fault is more Winslow’s than Stone’s. I’m a fan of Winslow’s novel of “Savages” (particularly his “tight sentences and smack-dab phrasings,” as I said in my 7.6 review of the film) but — here’s the first beef — I found his descriptions of Laguna Beach and other Orange County havens bothersome. Negligent, I mean. 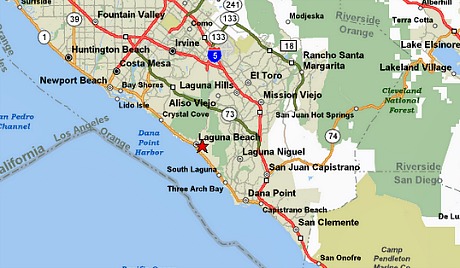 Winslow omits a fundamental aspect of the character of Laguna Beach and that general south-coast sprawl, which is that it’s an over-developed, traffic-suffocated hell-hole. I’ve felt this way about Laguna since I first visited in the late ’80s, which is one reason why I’ve only gone back once. Portions of the beach area are nice and you can take an attractive photo if you’re careful, but it’s way overstuffed — too many cars, too much clutter and crap, not enough parking, too many tourists, surrounded by Republicans. It was probably sublime in the 1920s and ’30s.

But to go by Winslow’s descriptions — “rich and beautiful,” “oceans and cliffs,” flower-covered hills, fragrant aromas — Laguna and that neck are just like Tuscany or inner Belize or the Cote d’Azur, albeit spotted with gas stations and freeways and 7-11’s and super-malls. That’s just not honest reporting. Drive down sometime and tell me Laguna satisfies anyone’s definition of “paradise,” which is how Blake Lively‘s “O” character describes it at the start of Stone’s film, the screenplay for which was co-written by Winslow, Stone and Shane Salerno.

My other complaint contains that SPOILER I mentioned in the headline. It’s about the ending. The first ending, I mean. The real one taken from Winslow’s book. Here it is:

How realistic or believable is it that O and Taylor Kitsch‘s Chon, in the prime of their lives, would purposely submit to death with a shot of morphine in order to stay with Aaron Johnson‘s Ben as he expires from a couple of gunshot wounds? The idea is that these three are so emotionally entwined that if one goes, the other two are compelled to follow because there’s no reason to continue without their profoundly close bond.

Except there’s this little instinct we’re all born with called “survive at all costs.” Ask any male combat veteran if he was ever seized by an impulse to lie down next to his dying best buddy and shoot himself in the temple. Doesn’t work that way. My late father, who was with the Marines in the Pacific during World War II, told me some stories that gave me a little insight into this. The instant somebody really close to you catches a bullet in the eye or falls off a cliff or gets eaten by a lion, the universal reaction is always “whoa, shit!… dude, that’s awful and sorry to lose you…I’m freaking and weeping but, well, at least I’m still here! Whew!”

Winston Churchill spoke of the exhilaration that comes when a bullet aimed at you misses its mark. I suspect that being close to death is more on that level.

That’s how it is, how we’re built. Life is awfully precious and you don’t throw it away out of sympathy for a fallen comrade. Until experience teaches me otherwise I say Winslow’s finale is bunk.