Here’s “Trailer From Hell” wise man Larry Karaszewski on James Bridges‘ Mike’s Murder (1984), which I wrote about four and a half years ago. The point was to urge Warner Home Video to release it on DVD, and if possible to release the original Bridges cut.

Here’s Pauline Kael‘s mini-review: “Debra Winger, in a superb full-scale starring performance, as a radiantly sane young bank teller in LA who has an affair with a curly-haired clear-faced young tennis instructor called Mike (Mark Keyloun). It’s a wobbly affair: She hears from him randomly over the course of two years — whenever the mood hits him, he phones her. One night, he’s supposed to come over late, but he doesn’t show. When she gets a call telling her he’s dead, it’s abrupt, bewildering. She can’t let go of him so quickly, and she tries to find out everything she can.

“Winger has thick, long, loose hair and a deep, sensual beauty in this movie. James Bridges, who directed, wrote the role for her after directing her in Urban Cowboy, and her performance suggests what Antonioni seemed to be trying to get from Jeanne Moreau in La Notte , only it really works with Winger — maybe because there’s nothing sullen or closed about her. The picture is atmospheric yet underpopulated; at times, it feels thin, and it turns into overheated melodrama in a sequence featuring Darrell Larson.

“But its view of the cocaine subculture (or culture) of LA is probably Bridges’ most original and daring effort, and it has a brief, intense appearance by Paul Winfield (as the record producer who brought Mike to LA) that’s right up there with Winger’s acting. With Brooke Alderson, Robert Crosson as Sam, and Daniel Shor as Richard, the performance artist. The Warner executives refused to release the picture until Bridges made some cuts and changes, and they probably breathed a few sighs of relief as they buried it.”

Here’s part of what I wrote in March ’08: “It didn’t register very strongly in the mid-Reagan era because it didn’t shoot for the stratosphere or deliver fierce visceral thrills, which is what audiences seemed to be responding to more and more back then. (The ’70s heyday had drawn to a close, and blunt-impact movies — sci-fi epics, actioners, tits-and-zits comedies — were gaining big- time.) But it handled itself and its subject — the L.A. drug-dealing scene — in a way that was almost deceptively powerful. It’s a sad and somber little piece that leaves a haunting after-vibe. 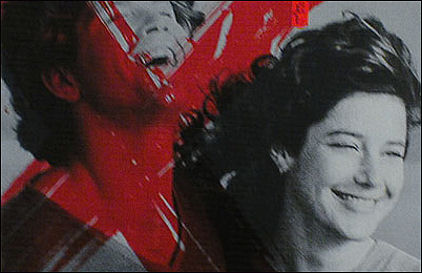 “And it had some unusually penetrating performances from Debra Winger, Paul Winfield, Mark Keyloun (a newcomer at the time who seemed to work mostly on television after Mike’s Murder and who retired from acting in the early ’90s) and Darrell Larson. There was real ache and loneliness in their emoting. Which lent unusual gravity to a story that structurally was only a murder-mystery.

“An IMDB posting by James Sanford says that Mike’s Murder has “a beautifully evoked, vaguely creepy atmosphere that hangs over every scene….the crime that sets the story in motion remains unsolved at the end, and perhaps that’s how it should be. It’s not important who really killed Mike Chuhutsky, Bridges seems to be saying. Not when it’s so obvious what killed him.”

“It’s been over ten years since I’ve seen Mike’s Murder, but I remember three things in particular: (a) the look of immense sadness on Winfield’s face as his character, a wealthy gay man who had a thing for Mike, considers the character flaws that led to his death, (b) the horrific howl that comes out of Larson, Mike’s not-very-smart best friend, as he’s about to be murdered by thugs for having stolen cocaine from a major dealer who lives in the hills, and (c) a nifty little sequence in the very beginning that shows a hamburger being prepared at Tomy’s on Pico Blvd.”

Here are several clips from the film.