From the mind of Joe Bomowski, posted yesterday at 1:10 pm: “This is independent of AFI and Silver Linings PLaybook‘s awards momentum, but in terms of JW thinking that SLP should or could be a bigger mainstream juggernaut than it actually is, consider this gem from a loud female coworker: “I like Bradley and I like Jennifer, but I don’t know if I like them together…not sure if I need to see this.” 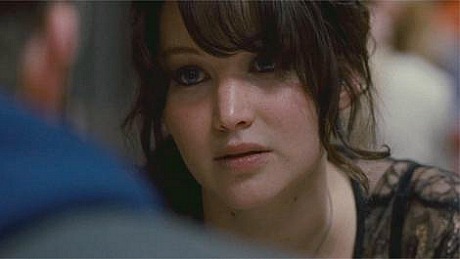 “This in some weird way is how women process movies. As a guy, as a movie fan, it’s totally alien to me, but women have these imprecise signifiers letting them know if a movie is ‘safe’ for them. It’s based on their real-life behavior (“Eww, I do NOT LIKE so-and-so because he cheated on so-and-so”) and their INTERVIEW DEMEANOR on talk shows, on the fashions they wear in magazine shoots. And they refer to the actors by their first names. Their TV friends Bradley and Jennifer from Kimmel and Stewart. It’s so bizarre.”

Wells: To borrow from Laurence Olivier‘s Christian Zell in John Schlesinger‘s Marathon Man, “Is it safe?”

Back to Bomowski: “I know that a feminist critic like Sasha Stone will deny a generalization like that, but look at the MINEFIELD of obstacles any movie has to work through to get to HER sweet spot. It’s undeniable. Jeff wasn’t entirely wrong to think SLP could be a crowd-pleaser, but when it comes to a romcom first and foremost you’ve gotta get the female vote, and something imperceptible to male critics, bloggers, and fans of SLP is ringing in women’s ears telling them there’s something ‘off’ about it, and that and it doesn’t have a non-threatening female lead finding out she can have her ad agency job AND the perfect guy!

“It’s kind of the world’s first sausage-fest romantic comedy in ages — I really only hear guys talking it up, and it’s usually guys who are AWESOME alpha-male blowhards like Wells or yours truly. Thus far, to bring it full circle, this doesn’t have the ‘campy chicks at the office water cooler listening to ’80s Rewind talking it up at the water cooler’ enthusiasm.”

Extra: Here‘s an excellent second-look appraisal by Rope of Silicon‘s Brad Brevet in which he addresses some complaints.