Last March I explained two things. One, that I’d read the script for Joel and Ethan Coen‘s Inside Llewyn Davis. And two, that Oscar Isaacs’ titular character in this matter-of-fact dramedy set against the backdrop of the early ’60s folk scene in Greenwich Village “bears no resemblance whatsover to the ’60s cafe folk-singer Dave Van Ronk,” or at least the Van Ronk I’ve read about over the years. 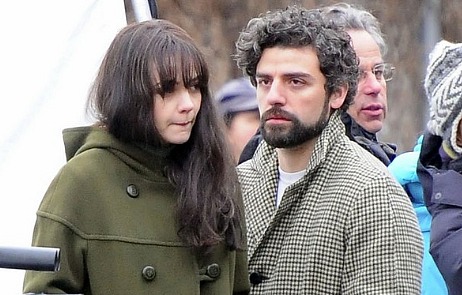 Look, maybe there were two Dave van Ronks back in the early ’60s. One was this large, hulking troubadour guy who knew everyone, who organized West Village musicians so they wouldn’t be exploited by cafe owners and who “was heavily committed to folk music, to the musician community, to his troubadour way of life and to everything that was starting to happen in the early ’60s…if nothing else a man who lived large.” And the other Van Ronk was this smallish, morose, Latin-looking guy (like Isaacs) who lived and thought small, and was no spiritual match for the hulking Van Ronk…a guy who was glum and vaguely pissed off and resentful, and tried to make it as a folk musician but wasn’t much of a go-getter and who slept on a lot of couches. And the Coens sat down and said to each other, “You know what? Fuck the real Dave van Ronk…let’s make a film about his doppelganger.”

Friedman was writing about a recent friends-and-coworkers screening of Inside Llewyn Davis in Manhattan. His source tells him that Carey Mulligan‘s character is “romantically linked” to Isaac’s — not true. She’s pregnant by him and needs to get an abortion, but in no way are they romantically linked, at least not on the page. Mulligan’s character can’t stand Isaacs’ character. Nothing but bile and bitterness.

Friedman writes that “the film got raves from those who saw it, but it’s also said to be unlike most Coen brothers movies — no violence, no sex, no weird irony.” That sounds like the script I read. Very plain and low-key and untricky.

One viewer tells Friedman that Inside Llewyn Davis “made me cry”….bullshit. The Coen brothers have never made films that anyone has wept over, and they never will. They make cinematic, camera-rich movies with feisty performances and sardonic undertones that you can smirk or chuckle at if you want…but forget weeping or sniffling. Not in their wheelhouse.

Inside Llewyn Davis could possibly travel to Cannes five months hence, Friedman writes…and if you ask me it probably will.