“Startled” is one way of expressing my reaction to Django Unchained‘s 100% Rotten Tomatoes rating. Another is “gobsmacked.” Because make no mistake — this film is a wankathon and a piece of faux-“performance art” that is so air-quoted and layered (or lathered) with ironic references that it doesn’t stand or breathe on its own, not by a damn sight. It’s “the kind of vaguely awful film that only a talented person could have made,” as Pauline Kael (I think) once said in a review.

I wasn’t convulsing and moaning in my seat, but I felt bored after the first hour and undernourished and close to appalled during the second hour (i.e., the dead zone) and then irritated as hell during the last 45 minutes.

“Talented but wildly undisciplined” is Quentin Tarantino‘s cross to bear. For his latest film is two hours and 45 minutes of indulgent spaghetti-western cheese whiz with leather hats and rifles and six-guns and horses. Plus an endlessly talky, verbally flatulent second hour (after a reasonably tight and engaging first 60 minutes) that has to be experienced to be believed. Yappity-yappity-yap-yap-yappity-yap-yap…we can talk all night long and into tomorrow morning and all the top critics will still kiss our ass and give us hand jobs…yaw-haw! Nigger twirlin’ a six-shooter! Nigger! Nigger on a horse! “Did you see a sign on my front yard that said ‘dead nigger storage’?” Oh, wait…

Django Unchained is a cowboy-playtime-in-a-sandbox movie that screams “movie!” every step of the way and isn’t worth a damn after the first hour. And yet critics are still going “whoo-hoo, that Quentin…my, what a clever-ass fellow! And how clever and knowledgable he makes us feel! Clever and knowledgable and highly moral because we approve of his anti-slavery message, and so we agree that white slave owners of the 1860s need to be shot, speared and slaughtered just like the Nazis in Inglourious Basterds.” So everybody comes out happy and looking good.

If you’re not that hip and you don’t mind sleazy supporting characters drooling all over each other and grotesque overkill from time to time & if you believe that long running times and blood-spattered walls are a mark of aesthetic integrity, you’ll probably love Django Unchained.

I just want to say upfront that I think slavery is, was and always will be a vile, terrible thing, and that Hollywood Elsewhere stands foursquare with Quentin Tarantino and the Weinstein Co. in condemning this wretched practice. HE also agrees, incidentally, that Abraham Lincoln and U.S. Congress did a very fine thing when they passed the 13th Amendment.

The real subject of Django Unchained isn’t “let’s get the slave owners of the middle 1800s the way we got the Nazis in Inglourious Basterds.” The real subject is “how lazy and bloated and wanky can the writing and filmmaking stylings of Quentin Tarantino get?” 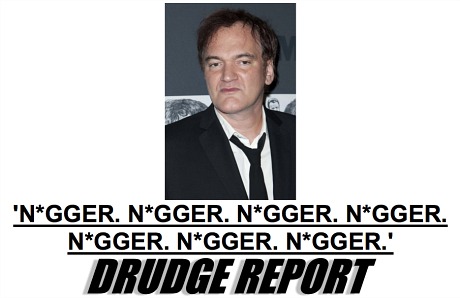 The guy started out dense and cool and hard in Reservoir Dogs and Pulp Fiction — his glorious peak period. Things got a little looser and less urgent with Jackie Brown, but the plotting and the flashbacks were nicely interwoven, and the performances (especially Robert Forster and Samuel L. Jackson‘s) were dead center. And then Tarantino became more of a style hound and a shitload-of-film-references guy with Kill Bill Volume 1 and Kill Bill Volume 2. I kinda loved Deathproof, the jukebox, hot girls and fast-car movie that was part of Grindhouse, but I was mostly bored and pissed off at Inglourious Basterds (especially by the beating the head of a German officer with a baseball bat scene). Django is about masturbation and masochism and show-off moves, and in my book a movie that uses “slavery” in order to get low, cruel and cheap.

Shot like an Almeria ’70s western (those fast-zoom shots are one such signature) and pointedly inauthentic in terms of period detail and speech, Django Unchained is the least “real” and most self-consciously fake Tarantino film ever made. It’s semi-“thoughtful”, sometimes comedic and smirking and incredibly impressed with itself. It’s a personality movie start to finish. Mildly funny a few times, lurid, unsubtle, tedious, simultaneously Mandingo-esque and an anti-Mandingo, a hoot, astonishing at times and too effing long. But at least it’s not three hours, which it allegedly was a while back.

I guess it’s written somewhere that any movie about a moral pestilence has to end with punishment and cleansing of evil behavior, and Django Unchained certainly does that. Although I wouldn’t call the walls of DiCaprio’s mansion “clean” at the end. What they need is a five-man crew with sponges, rags, buckets of hot water and a container of Mr. Clean.

Prescient Todd McCarthy observation #1: “The anecdotal, odyssey-like structure of this long, talky saga could be considered indulgent [as] some might object to the writer-director’s tone, historical liberties, comic japes or other issues”…do ya think so?

Prescient Todd McCarthy observation #2: “A stellar cast and strong action and comedy elements will attract a good-sized audience internationally, though distaste for the subject matter and the irreverent take on a tragic subject might make some prospective viewers hesitate.”

As the movie is more of a QT variety show than anything that rings of commitment or sincerity, the performances, flamboyant as they are, only sink in so deeply. I don’t think Jamie Foxx‘s Django performance is strong or tasty enough, if you wanna know. He looks cool and sometimes cuts a dashing figure, but the film is not really his to own. Christoph Waltz‘s Dr. King Schultz, a German bounty hunter with a loquacious speaking style, has more pizazz to throw around. Southern plantation owner Calvin Candie (Leonardo DiCaprio) struck me as a typical Tarantino gasbag. Samuel L. Jackson‘s obsequious Stephen, Candie’s all-knowing, totally-subservient house slave, might be the most intriguing. Kerry Washington‘s Broomhilda…naah.