“This has gone back all the way down to Shakespeare’s days. When there’s violence in the street, the cry becomes ‘blame the playmaker.’ And you know, I actually think that’s a very facile argument to pin on something that’s a real-life tragedy.” — Quentin Tarantino on the cultural interplay between (for one example) the casual, cine-stylish, mock-ironic violence in Django Unchained and the real-life slaughters that are happening daily in this country. 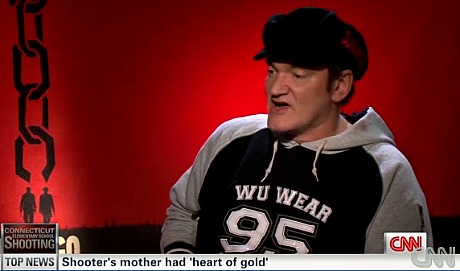 The fact that Shakespeare resolved his dramatic conflicts with third-act violence is hardly analogous to the way Tarantino soaks his characters (and, in Django, the walls of his sets) in blood and brain matter. Tarantino’s blood baths are done with a wink, “referenced,” in no way earnest. They’re a jape, and yet underneath that jape is a message that says two things, in my view. One, bullets slamming into a long line of racist bad guys is at the very least amusement for jaded cineastes, and if I, Quentin Tarantino, could think of some way to make blood, entrails and brain matter more amusing, I would. And two, the slaughter of a long line of Southern racists is justified payback for the sins of slavery, and so I can go to town all I want because I’m wrapped in an anti-slavery, anti-racist cloak.

December 19, 2012by Jeffrey Wells30 Comments
« Previous post
“Where Have You Been?”
Next post »
Tree of Life 2: Oklahoma Depression