“She’s not Miss Congeniality, but that’s not going to find Osama bin Laden,” says a former CIA associate who knows the real-life “Maya,” the flinty character played by Jessica Chastain in Zero Dark Thirty. This source and others are quoted in a 2.10 Washington Post piece about the CIA analyst whose contributions to the bin Laden hunt were crucial,” reports Mark Miller. 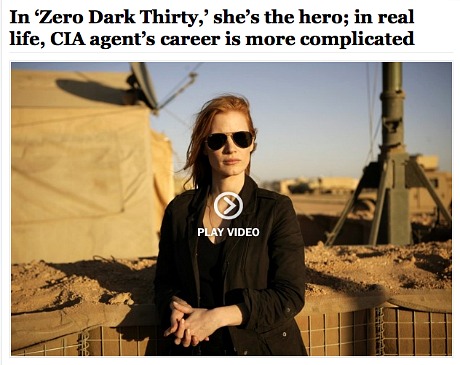 The Zero Dark Thirty attention has “sent waves of envy through the agency’s ranks.”

The real Maya’s “defenders say the operative has been treated unfairly, and even her critics acknowledge that her contributions to the bin Laden hunt were crucial. But the developments have cast a cloud over a career that is about to be bathed in the sort of cinematic glow ordinarily reserved for fictional Hollywood spies.

“The character Maya, which is not the CIA operative’s real name, is portrayed as a gifted operative who spent years pursuing her conviction that al-Qaeda’s courier network would lead to bin Laden, a conviction that proved correct.

“At one point in the film, after a female colleague is killed in an attack on a CIA compound in Afghanistan, Maya describes her purpose in near-messianic terms: ‘I believe I was spared so I could finish the job.’