Nobody and I mean nobody is better than yours truly at missing out on small Sundance buzz films. Just as they’re just starting to break out and be talked about, I mean. I am a stone friggin’ genius at not being in the midst of the early chatter, much less the forefront. Take Randy Moore‘s Escape From Tomorrow, which I missed last Friday evening because I decided to see Don Jon’s Addiction instead and which I missed late Saturday night because I don’t see movies at 11:30 pm, period. 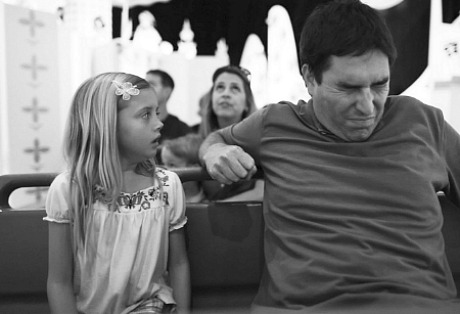 From Randy Moore’s Escape From Tomorrow.

But I’ll catch it it at the Library on Thursday at 5:30 pm…okay? Even if that’s not okay it’ll have to do.

I have a queer little equation that I carry around while covering this festival. The more excited that brilliant, impassioned but sometimes off-on-their-own-orbit critics get about a quirky Sundance film, the less likely Joe Popcorn is going to even hear about it much less see it, if and when it gets commercially released.

And Escape From Tomorrow’s commercial prospects are apparently in doubt, says L.A. Times guy Steven Zeitchick, because it casts a dark, mournful shadow on the Disney Theme Park experience. But maybe (who knows?) it’ll become “one of those films” that everyone wants/needs to see. Or maybe it’ll play a week at the Nuart.

I honestly think it’s different when guys like myself go apeshit over a film. Then it has a chance because I listen to my anti-intellectual instincts, I don’t get all caught up in my own swizzle-stick obsessions, and because my feet are planted squarely on the pavement.

“A surrealist, genre-defying black-and-white film,” Escape From Tomorrow “is one of the strangest and most provocative movies this reporter has seen in eight years attending the Sundance Film Festival. And it may well never be viewed by a commercial audience.”

And this: “To me this is the future,” Moore says. “Cameras in your hand. Cameras in your glasses. Anyone can be shooting at any time. And I think it will explode.”

“Moore has never attempted to speak to anyone from Disney, nor has anyone ever contacted him. Still, there is no way the company could be happy with the result, in part because of what many courts might deem rampant trademark infringement but also because of the nature of the thing, a juxtaposition of Disney’s family-friendly corporate imagery with some pretty grotesque behavior.

“Whether a distributor, even a bold one, takes a flier on this is the big question. The media interest would be high. The legal bills would be even higher.

“The film’s rights are being represented by Cinetic Media, which has sold high-profile Sundance titles such as Precious and Napoleon Dynamite as well enigmatic fare such as 2010 Banksy movie Exit Through the Gift Shop. The company’s principal, John Sloss, declined comment for this story, but the feeling in distribution circles is that the movie will have a legal Everest to climb. While trying to censor an independent film tends to blow up in a conglomerate’s face, it would be hard to imagine how Disney would ever allow this film to see the light of day.”