It’s Saturday, 5.8 at 6:30 am — a big day for me because Joel and Ethan Coen‘s Inside Llewyn Davis screens this evening at 7:30 pm at the Salle Debussy. I’ve been waiting on this for a long time, ever since I read the script and posted a favorable review in early March 2012. I’ll also be catching Arnaud Desplechin‘s Jimmy P. (Psychotherapy of a Plains Indian) at 8:30 this morning and Rebecca Zlotowski‘s Grand Central at 11 am. I’m on the fence about Laura Lau‘s Bends, which screens at 2 pm…but maybe. 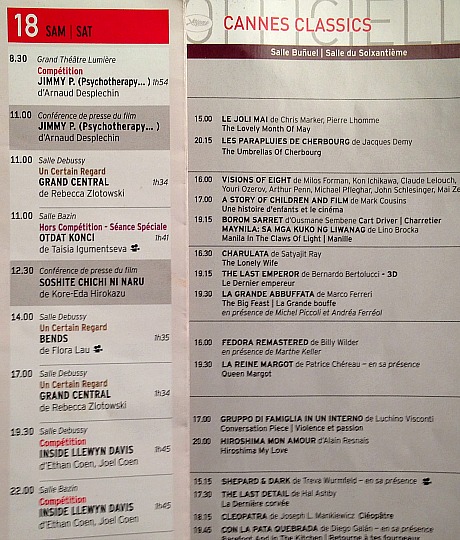 I can’t watch the 3D version of The Last Emperor because it directly conflicts with Inside Llewyn Davis. Crap. I also can’t attend the 11 am marketing panel at the American Pavillion, which Indiewire‘s Dana Harris is hosting.

From 3.9.12: “The Coen’s script, typically sharp and well-honed with tasty characters and tart, tough dialogue, is about lethargy, really. And about taking care of a friend’s cat. And seeing to an abortion and trying to get paid and figure out your next move and whatever else, man. It’s about a guy who isn’t even close to getting his act together, who just shuffles around from one couch to the next, grasping at straws, doing a session recording one day and trying to land a performing gig the next, like a rolling stone, no direction home.

“It’s about how shitty it felt to be aimless and broke without a lot of passion in the first year of the Kennedy administration. It has flavor and realism, but it has no story to speak of, really. Shit just happens. It’s a bit like A Serious Man, but without the theme about God’s cruelty and indifference to the plight of mortals.

“The period details are subtle and spot-on, and yes, Bob Dylan does make an oblique appearance at the very end (and is heard singing “I Was Young When I Left Home“) but Davis…? What a loser, what a deadhead. But I loved the script. It’s a real Coen Bros. film. When you’ve finished it you know you’ve tasted the early ’60s and that atmosphere (if I know the Coens the CG recreations of 1961 Manhattan are going to be exceptional) and that kick-around way of life, and that you’ve really become familiar with Llewyn Davis’s loser lifestyle. It’s something to bite into and remember.”