“For all the considerable pain Stratton Oakmont inflicted on its investors, here is something you should remember. It doesn’t even begin to approach the kind of pain the real Wall Street can inflict. Firms like Stratton Oakmont can’t bring the financial system to the precipice. They can’t cause a global recession. They can’t cause panic in London, New York and every other financial capital. To use Stratton Oakmont to represent Wall Street doesn’t begin to get at Wall Street’s sins.” –The final graph in Joe Nocera‘s 12.22 N.Y. Times piece, “Sex and Drugs and I.P.O.’s– Martin Scorsese’s Approach in The Wolf of Wall Street.” (Nocera is a business/op-ed columnist for the Times. He also does business commentary for NPR’s Weekend Edition.) 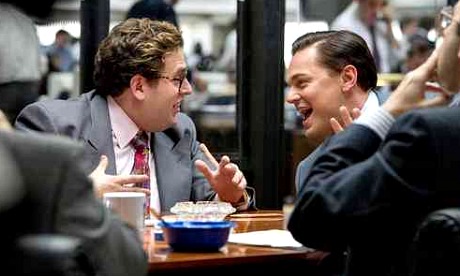 Artificial intelligence, etc. The airborne wifi won’t let me watch this one either. When directors of photography direct a film, some subtle but necessary ingredient always seems to be missing. Does this trailer indicate that Wally Pfister, Chris Nolan‘s dp of choice since Memento, might be the exception to the rule?

Little White Lies‘ Calum Marsh has absorbed the madhouse saliva insanity of Martin Scorsese‘s The Wolf of Wall Street and turned right around and injected almost the same kind of energy (on Scorsese’s part as well as DiCaprio/Belfort’s) into his review — the best way to respond to a film one really likes, no? Your review becomes the film and vice versa.

Marsh begins talking about the somewhat staid late-period films that acknowledged masters in their 70s or older have made.

“But there is another, less common variety of late period film, those which in their vitality and esprit defy the ageing of their maker — films whose history is either digested or divested, purged of its unwieldy weight, preferring instead to sprint lightly toward the new. The Wolf of Wall Street is one such film — perhaps even the such film: a nimble, impossibly jocund thing, it throbs and pulsates with life, eager to sop up the world’s generous excess. This is a film of extraordinary jejunity; its manner is raucous, sprightly, unhinged. It barrels through its 179-minute running time, spending scarcely a moment in repose, sprinting there and back without any need for breath or pause.

The Virgin America wifi that I’ve paid $26 bucks for can’t handle streaming video, even two minutes’ worth on YouTube. Well, it can but it takes forever to load. All I got was the opening bit with Tom Wilkinson and the little kid, and then it froze.

Hitfix has posted an ass-kissing feature about the most powerful award-season players (i.e., individuals and organizations). The usual heavy hitters top the list — Harvey Weinstein, Scott Rudin, Paramount’s Brad Grey and Megan Colligan, Fox Searchlight’s Nancy Utley and Stephen Gilula, the awards consultants (i.e., Lisa Taback, Cynthia Swartz, Michele Robertson, Karen Fried, etc.). “The list has been determined by each person or organization’s influence in getting prestige projects made, historical pedigree in achieving nominations and wins, and relevance to this year’s race,” the piece states. I don’t know how to say this without coming off as entitled, but are you going to tell me that the top online industry-focused columns aren’t an essential part of this fraternity?

You have to hand it to Barney’s of Beverly Hills — they do not fool around with their prices. Pay the most anyone’s ever paid or will pay for a very well-made pair of classic lace-ups, or…whatever, buy a pair of socks or take a walk. 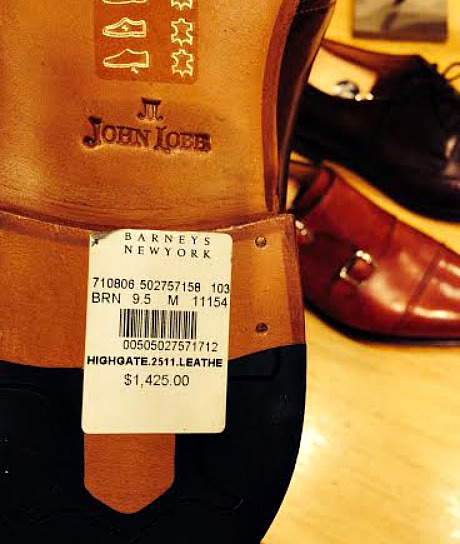 In yesterday’s thread about a Wolf of Wall Street review written by The Wire‘s 23 year-old critic Esther Zuckerman, HE commenter “Jeff” said that “[it] works within the context of other reviewers to give a different generational perspective but Millennials have a much more pronounced sensitive side and tend to be horrified by mean or fratty/bro antics (specifically someone whose background reads Harvard/Westlake, Yale, Village Voice ).”

In response to this Ray Quick/LexG posted his own similar riff about Millenials. It’s unwise to generalize too much, but is there a measure of validity to some of LexG’s observations? And if not, why or in what way?

“Late to this, but [this is an] interesting and very true point about Millennials and younger critics,” Lex G began. “This applies to the arisp/Joe conversation above too, but I think there are interesting and valid writing styles to be had from ‘younger’ critics and viewers. Hell, I bluffed my way through a film studies degree at 22 even though I summarily rejected the whole ‘movies reflecting their socio-historical time” throughline that they force upon film students, and used to spin superlatives-laden capsules for my high-school paper starting at 14. But I do find, for better or worse, a lot of the ‘young’ critics of today are this weird mix of overly cerebral/detached (explained by relative proximity to academia) AND now have this post-Armond obsession with humanism and political correctness.

“In weird ways, the Millennial film fans I know or read, you’re always between a rock or hard place. They’re more easily offended by content and nihilism than even some ‘old man’ critics….yet they also have a sociopathic resistance to any warmth or earnestness in film. It’s why places like Slant or critics like Calum Marsh or Ignatiy are a little mystifying. They’ll front like the most detached, scientific viewer…[and] then in the next review clamor for a type of redemptive humanist religiosity from movies.

We’re six days away from Christmas, a celebration of the birth of Yeshua of Nazareth and of certain Christian values (love, charity, compassion for the less fortunate) spoken of in Charles Dickens‘ A Christmas Carol, and once again we’ve been reminded what a vile cultural force rightwing Christians have become in this country. For a long time Christianity has been more or less synonymous with the values of ignorant yahoo dumbshits, and this proud tradition is now being doubled-down by rightwing media, people like Sarah Palin and at least one faith-based organization that has been defending the right of Duck Dynasty‘s Phil Robertson to casually spew anti-gay hate speech in a GQ interview. They wouldn’t be talking about the glories of free speech if Robertson had told GQ‘s Drew Magary that he finds rightwing Christianity abhorrent and anathema to the values of genuine Christians. If the spirit and mind of Yeshua could somehow become mortal and return to the planet Earth, he would never stop throwing up. (Tip of the hat to Woody Allen.) 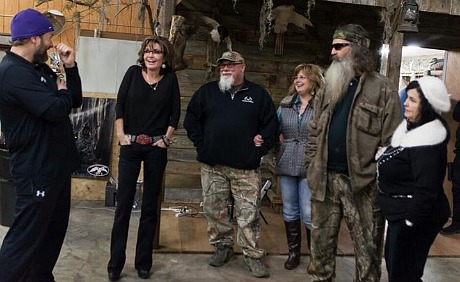