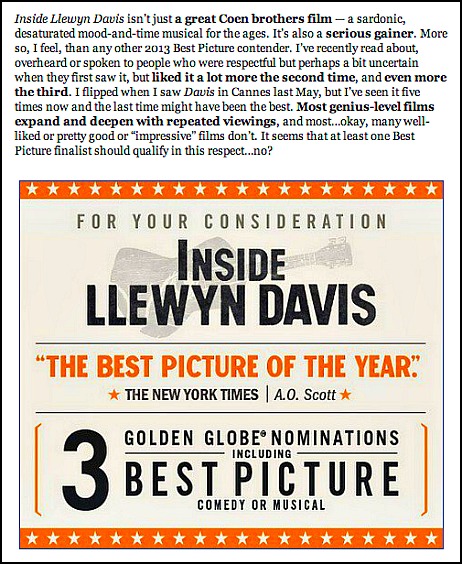 Inside Llewyn Davis isn’t just a great Coen brothers film — a sardonic, desaturated mood-and-time musical for the ages. It’s also a serious gainer. More so, I feel, than any other 2013 Best Picture contender. I’ve recently read about, overheard or spoken to people who were respectful but perhaps a bit uncertain when they first saw it, but liked it a lot more the second time, and even more the third. I flipped when I saw Davis in Cannes last May, but I’ve seen it five times now and the last time might have been the best. Most genius-level films expand and deepen with repeated viewings, and most good or pretty good or “impressive” films don’t. It seems that at least one Best Picture finalist should qualify in this respect…no?

The Coens may not make warm and fuzzy movies that put a lump in your throat (the thought!), but they’re durable, gold-standard auteurist champs. People will be writing about these guys and their films 25, 50, 100 years from now. And yet people still say after seeing one of their films, “Yeah…but kinda chilly-ish…darkly funny but a little solemn.” No shit? This is the palette that these guys work with, and their consistent delivery of same is one of the things that makes them world-class. Agreed — Inside Llewyn Davis is sardonic. Some of the characters are on the weary, bitter, cynical side, and it doesn’t deliver what most people “want” in a Saving Mr. Banks sense. But what a realm, what a sense of time and place. And what hilarity!

Inside Llewyn Davis is about frustration and wintry despair and the Sisyphusian struggle of a folk singer (Oscar Isaac‘s lead character) who’s clearly talented and cares about his art but isn’t good or lucky enough to make it to the next level. The film is about the week-long journey he goes through that takes him from a semi-resigned ‘fuck me’ slumber mentality to an ‘oh, to hell with it…this shit is infuriating…I hate folk music!’ feeling.

Inside Llewyn Davis is a pellet dropped into water. The depth and the delight is in the vegetable dye that spreads out and sinks in, and though obviously emanating from the pellet, da coolness is in the mixture. The film, inspired and exquisitely made as it obviously is, is the trigger but not the all of it. But it is some kind of perfectly sombre, wonderfully atmospheric, dryly hilarious, pared-down period masterpiece — a time-tunnel visitation to 1961 Greenwich Village that feels so meditatively right and authentic and resonant that I could plotz.

I know a profound American art film when I see one. I know what exquisite less-is-more movie backrubs are all about. I know the real take-it-or-leave-it when I experience it.

This movie is a treasure — an embarassment of Coen-y riches that doesn’t quite “add up” to anything, certainly not for anyone looking for a character-driven “story” or a conventional ending or any of that jazz. But it does add up to the fact that it’s an embarassment of Coen-y riches. The despair that tugs at Davis is so delicious it’s like fucking ice cream. And the dry and succinct sensibility that informs the Coen’s direction is so richly realized. And the timing of each scene, the perfect acting, the cutting, the magnificent wintry color scheme…I could go on.

The point, I think, is that Inside Llewyn Davis isn’t “about” anything except itself. It’s acute social satire on one level and on another level an extremely sly, austere and culturally on-target art pour l’art movie. The Coen’s films have always been less about some kind of precise narrative yield or engaging character turns or what-have-you and more more about (take your pick or choose all) irony, detail, authenticity, perversity, painterly beauty, eccentricity, flair, color, hints, allusions.

People used to say that this or that painting “meant” something, that it was “saying” this or that. Then someone came forward and said that certain paintings were simply about themselves, the fact that they’d been painted and what you saw was what you got. They weren’t re-constituting an anecdotal fact but constituting a pictorial fact. That’s what Coen brothers films are. They’re about paint, sardonic consistency, that smart Minnesota Jewish guy attitude, a certain downbeat opiate high…fill in the blank. Take the adventure. Let it in, man. 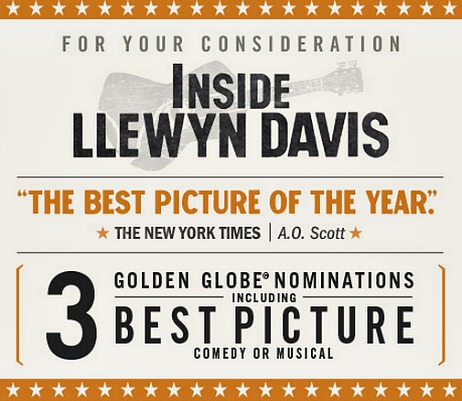 Note: This is the second in a series of HE Sink-In Advertorials. I chose the films that I feel a special admiration for or connection with, and then went to the distributors to partner up. It would be one thing if they came to me first, but they didn’t — this is my action. The advertorial will stay on top for 48 hours (or until midnight on Friday, 12.13). New stories will appear below it.