Best “New” Film Of The Week

A couple of hours ago I wrote a tidy little riff about Jack Clayton‘s Room At The Top (’59), and then it was accidentally erased. The point is that I finally saw this sharply-written, very cleanly composed film last night for the first time and was seriously impressed by it. The first belch of British kitchen-sink drama (resentful, self-destructive working-class blokes and their birds + lots of drinking, smoking, arguing and shagging), Room opened in the U.S. in May 1959. It was followed four months later by the film version of John Osborne‘s Look Back in Anger with Richard Burton and Claire Bloom, and a new genre was off to the races. When the late Simone Signoret won a Best Actress Oscar for her portrayal of Laurence Harvey‘s somewhat older love interest, she became the first non-integrated, foreign-based actress to do so. I’d forgotten she was fairly hot at the time. But it wasn’t long after her Oscar triumph that Signoret decided to (is there a p.c. brownshirt way to put this?) let herself go and become a character actress. She died at a relatively young age, 64, in 1985. 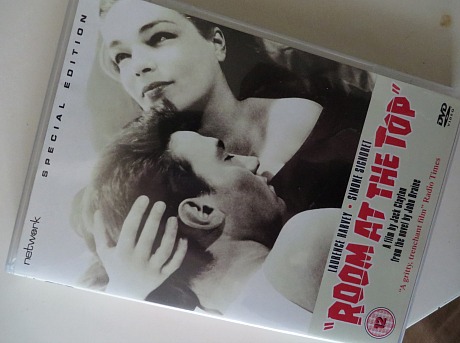