12:01 pm Pacific: 12 Years A Slave has won the Boston Film Critics Society’s Best Picture award. Boston Globe critic Ty Burr is suggesting that Paramount/Allied screwed up by not screening Wolf of Wall Street for Boston critics sooner — roughly a third of the voting body missed the one last-minute Beantown screening. In the view of Boston Phoenix critic Brett Michel, “Paramount completely fucked The Wolf of Wall Street here in Boston. Because five people in the [BSFC] room today couldn’t make it to Friday’s 11th-hour screening, Marty’s film was doomed to come in second in no less than five(!) categories: best picture, director, actor (DiCaprio), screenplay (Terrence Winter) and editing.”

11:46 am Pacific: 12 Years A Slave‘s Steve McQueen has won the Boston Film Critics Society’s Best Director award. Which means Slave has the Best Picture award in the bag or…?

11:32 am Pacific: The Boston Film Critics Society has handed its Best Actor award to 12 Years A Slave‘s Chiwetel Ejiofor, and its Best Actress award to Blue Jasmine‘s Cate Blanchett. The late James Gandolfini has won the Best Supporting Actor trophy for his performance in Enough Said — a nice respectful gesture but why? JG was tender and vulnerable in Nicole Holofcener‘s film, but are you telling me he delivered a more affecting performance than Jared Leto in Dallas Buyer’s Club or Jonah Hill in The Wolf of Wall Street? Nebraska‘s June Squibb was won the BFCS award for Best Supporting Actress.

9:53 am Pacific: I’m concerned that the Boston Film Critics Society, voting as we speak, has given its Best Cinematography award to Gravity‘s Emmanuel Lubezski. This suggests they might give Gravity, a relatively unsophisticated “easy lay” consensus choice, their Best Picture award. That’s depressing. As I explained last night they need to either go for 12 Years A Slave or The Wolf of Wall Street. If a presumably thoughtful film critics group is going to give Gravity their Best Picture prize they might as well go all the way into not-very-hip consensus territory and give it to Saving Mr. Banks or Philomena…why not? 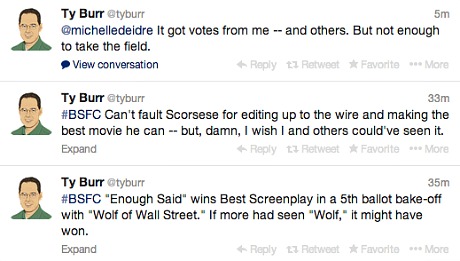 Other Boston picks include The Act of Killing for Best Documentary, The Wind Rises for Best Animated Film, Inside Llewyn Davis for Best Use of Music in a Fioml, and Fruitvale Station‘s Ryan Coogler for Best New Filmmaker.