Four days ago the L.A. Times opinion page posted a short recollection piece by novelist and former L.A. cop Joseph Wambaugh. It’s about Peter O’Toole and Lenny Bruce getting pulled over by the fuzz a half-century ago after attending an illegal after-hours club that offered drugs and prostitute services. A petty, nickel-and-dime bust by today’s standards but this was 1962, when the country was still vaguely in the grip of prudish Eisenhower-era values. O’Toole was in town to do interviews for the then-upcoming Lawrence of Arabia, which no one had yet seen. Anyway it’s a good story. I love the idea of Bruce and O’Toole enjoying a late-night drink and a toke together and basically being up to no good. My kind of rambunctious company, even though both were known to be judgmental pricks on occasion. (Thanks to Todd McCarthy for the link.) 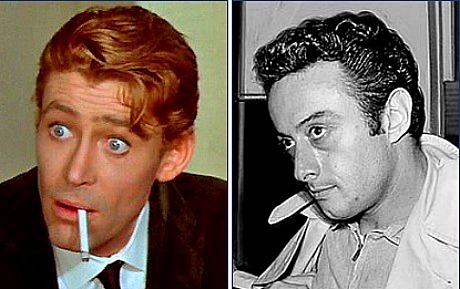 I was looking for a color photo of Bruce to match the above color shot of O’Toole, but no dice. Odd that aside from an odd album cover jacket there are apparently no color candids of Bruce anywhere online. Strange. You’d think there would be at least a few.