Wolf Is Year’s Best Film. Easily. No Debate. Shut Up.

Martin Scorsese‘s The Wolf of Wall Street is a breathtaking, orgiastic, drop-your-pants comic masterpiece — a vulgar, hilarious, metaphorical indictment of the 1% Wall Street adrenaline greedheads who have devalued and cocained and flim-flammed the U.S economy into the ground over the last 30-plus years. It’s Scorsese’s magnum opus, an art-film humdinger for the ages. It’s pretty much guaranteed that the Academy fuddy-duds are going to go “whew, that was exhausting!” and “uhm, I didn’t like the characters very much.” And with these words they will be removing themselves from the pulse of 21st Century culture and basically putting themselves out to pasture. Either you get this film or you don’t, and if you get it…well, Wolf-ies forever! Best Picture, Best Director, Best Actor (Leonardo DiCaprio), Best Supporting Actor (Jonah Hill), Best Adapted Screenplay (Terrence Winter) and so on. 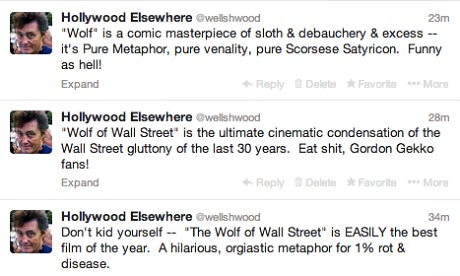