“Cinerama, an independent movie theater in Rotterdam, asked me to make a poster for the upcoming [booking of] The Wolf Of Wall Street, directed by Martin Scorsese.” — Clemens Den Exter, who invites all interested parties to write him at clemensdenexter@gmail.com “for questions about ordering one of these posters.” 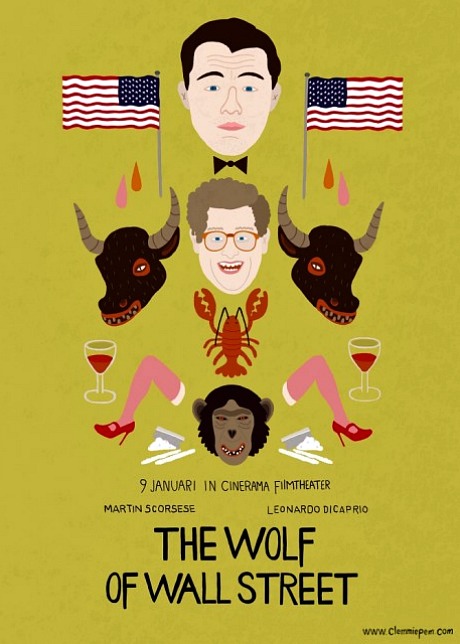 Before the Academy’s board of governors voted to rescind the original song nomination for “Alone Yet Not Alone,” (music by Bruce Broughton, lyric by Dennis Spiegel), I had paid no attention to the same-titled film that the song is attached to. That’s mostly because it isn’t slated to formally “open” until June 14, and yet it had a half-ass opening in nine cities last September. (Which is how the song qualified for Oscar contention.) And yet Rotten Tomatoes and Metacritic haven’t acknowledged its existence.

I haven’t seen Alone Yet Not Alone, but this still appears to depict young white girls being carried away by the wily pathan.
(More…)
January 29, 2014 6:41 pmby Jeffrey Wells

It pains me to say this but George Clooney‘s The Monuments Men (Sony, 2.7) is a write-down. It doesn’t work. It ambles and rambles and tries for a mixture of soft-shoe charm and solemn pathos, but it never lights the oven or lifts off the ground or whatever creative-engagement metaphor you prefer. It breaks my heart to say this. I went into yesterday morning’s screening with an attitude of “if this thing works even a little bit, I’m going to try to give it a pass or at least be as kind as possible.” I feel emotionally bonded with this film, you see, because of my visit to the set last May and that loose-shoe piece that I posted about it on 7.1. Clooney approved the visit and was gracious and cool during my four-hour hang-out, and I feel like I owe him a little kindness. But I can’t cut Monuments Men a break. I’d like to but I can’t.

Yesterday Indiewire‘s Anne Thompson and TheWrap‘s Steve Pond reported on a firm “either-or” declaration by Toronto Film Festival artistic director Cameron Bailey, to wit: if producers/distributors henceforth unveil their Oscar-bait films at the Telluride Film Festival, they can’t show them during the first four days of the 2014 Toronto Film Festival (9.4 thru 9.14). How will producers/distributors respond? I’d be hugely surprised if they decide to blow off Telluride, which is easily the more preferred venue for award-season kickoffs.

Anyone who knows the game will tell you that Toronto is the Chicago stockyards — an overcrowded, market-driven clusterfuck — while Telluride is a serene haven of refined taste and film-nerd worship — the ideal launch for any film that needs the right people to see it and embrace it (or at least thoughtfully kick it around) and begin the conversation.

Toronto’s “uh-oh” bell sounded last August when the reps of J.C. Chandor‘s All Is Lost, Joel and Ethan Coen‘s Inside Llewyn Davis and Alexander Payne‘s Nebraska decided to preemptively cast their lot with Telluride and sidestep Toronto. Bailey didn’t have to threaten them by withdrawing TIFF slots during the first four days — they decided to ignore Toronto altogether. This initiated what I called “a relatively new fall-festival phenomenon — the Oscar-contending, Telluride-preferring, Toronto-blowoff movie.”