Six- or eight-paragraph Sundance “reviews” are out of the question for me. Between three movies per day and all the running around the most I can manage, it seems, is to tap out tweets and then build these into three- or four-paragraph riffs, but I have to do this on the shuttle bus between screenings or while sitting in the hatefully drafty Yarrow lobby or in my seat at the Library of the Eccles before a film begins, and then bang out what I can in the mornings before the day starts. But even by that loose-shoe standard I’ve been falling behind over the last 48 hours. (Yesterday I had to move out of condo #1 and into condo #2, a time-eating pain in the ass.) So I’m staying in the pad for a few hours today (Sunday, 1.20) to catch up. 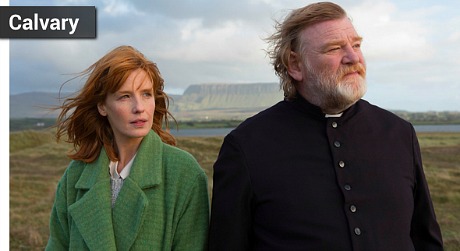 At 2:15 pm an 11-hour adventure begins. Amir Bar Lev‘s Happy Valley, an examination of the Jerry Sandusky sexual-molesting Penn State reach-around scandal, screens at the MARC. Then I’ll be catching the first hour of Steve James‘ Life Itself, the 112-minute Roger Ebert doc. (My suspicion is that it’s going to be an overly Valentine-ish portrayal of the late critic — I’ll at least be able to detect whether that’s true or not within 60 minutes.) Then comes John Michael McDonaugh‘s Calvary (which I’m 100% certain will be a moderately engrossing, well-written thing with a flawless Brendan Gleeson performance) at 6:45 pm. The q & a for this Ireland-set drama will end around 8:30 pm or so, leaving about 75 minutes before Richard Linklater‘s 160-minute Boyhood begins. Between the intros and whatnot the epic-length docudrama-resembling narrative will end around 1 am. Back to the condo and crash by 2 am, maybe. Monday’s writing and screening scheduled will of course be compromised by this.

In short, the exciting but demanding ordeal of filing and running around and chit-chatting with colleagues and speed-walking down Kearns Blvd. and sharing cabs and catching buses and seeing a minimum of three films daily (forget relaxing or any kind of calming, sit-down meal) is as involving and to some extent as interesting as the content of the films. When a commendable movie delivers the goods all the other stuff falls by the wayside, of course, but it’s been demonstrated time and again that seeing films under these circumstances assures a certain degree of fatigue and distraction. Even when you try like hell to see and cover everything you’re still missing a good half of the worthwhile films up here. Not bitching, just saying.