Town That Looked Away

Amir Bar-Lev‘s Happy Valley is a shrewdly sculpted, richly perceptive study of denial — of people’s willingness and even eagerness to practice denial if so motivated. The specific subject is the Penn State child-abuse sex scandal of 2011 and 2012, which resulted in convicted pedophile Jerry Sandusky doing 30 years in jail and the late beloved Penn State coach Joe Paterno being at lest partly defined between now and forever as a pedophile enabler. The Freeh report (conducted by former FBI director Louis Freeh and his law firm) stated that Paterno, Penn State president Graham Spanier, athletic director Tim Curley and school vp Gary Schultz all knew about Sandusky probably being guilty of child molestation as far back as 1998, and that all were complicit in looking the other way. State College residents and especially Penn State football fans were enraged when Paterno was fired for not saying or doing enough. Even after the Freeh report they wouldn’t let go. 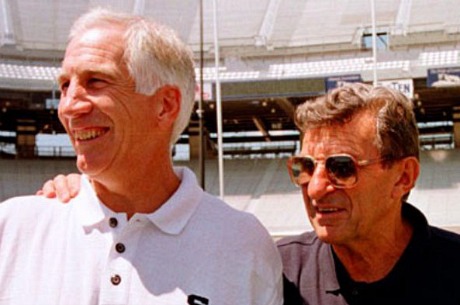 People always say “I never knew” or “I never noticed anything” whenever someone is busted for something appalling or illegal or worse. The central message of Happy Valley is that if people like or admire someone, they don’t want to know or notice anything bad about him/her. (That was Burt Lancaster‘s line in Judgment at Nuremberg — “If we did not know it’s because we did not want to know!”) People will do daily calisthenics to avoid facing facts. What’s great about Happy Valley is that it sticks to specifics and never mentions that denial disease is a pandemic. Cheers to Bar-Lev (The Tillman Story, My Kid Could Paint That) for delivering another riveting doc.