When Dern Had Reddish Brown Hair

I saw Stuart Rosenberg‘s The Laughing Policeman (’73) in two shifts last night. I bought the DVD at Amoeba earlier in the evening for only $5. I came back, watched the HBO Herblock doc (not bad, good enough, fine) and then popped in the Policeman DVD around 9:30 or so and started to watch. Within 15 or 20 minutes I was out. I woke up a little later, went to bed, couldn’t sleep, got up and watched the Rosenberg again. It’s a character-and-atmosphere film first and a big-city whodunit second. (Or third.) The plot doesn’t add up but it’s a fairly decent film. Realistic mid-range policiers with movie stars haven’t exactly disappeared but when was the last good one? Bruce Dern played his usual grinning or glaring eccentric — half-weird, half-cagey. Either you got Dern or you didn’t. Dern’s detective to an angry back guy in Mission district: “What are you gonna do, eyeball me to death?” 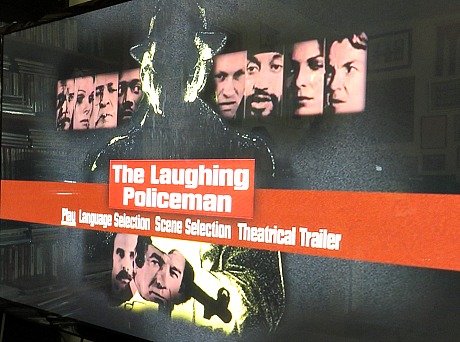 “The plot tends to be convoluted from its lengthy opening sequence, in which all the passengers of a bus, including a detective, are massacred by a mysterious machine-gunner. A confusion of other corpses and a gory shootout help cloud the proceedings.

“But Walter Matthau, as the veteran plainclothesman whose partner was slain; Bruce Dern, his new partner, and their teammates not only provide meticulous expertise in tracing the killer, but also reveal themselves and their views of rough jobs.

“Credit much of the film’s flavor and insights to Thomas Rickman’s adaptation of the novel by the Swedish husband-and-wife team of Per Wahloo and Maj Sjowall. This script captures the character and the earthy, germane vernacular, four-letter and otherwise, of the police, street people, blacks, prostitutes and pimps of San Francisco that substitutes for the book’s Stockholm.

“Mr. Matthau gives an underplayed and forceful portrayal of the taciturn, gum-chewing sleuth frustrated by a lack of motives for the seemingly unrelated slayings, who turns to a previous, unsolved murder to unearth the killer. It is in keeping with his old-timer’s dedication to a plodding and dangerous job that makes him a stranger to his wife and kids. Mr. Dern’s delineation as his cynical sidekick, who occasionally messes up procedures with hard-nosed tactics, is equally strong and natural.

“The film juxtaposes police practices and points of view in varied vignettes, from Anthony Zerbe’s characterization of the harassed lieutenant yelling for results to Lou Gossett’s black detective who realy knows his black suspects and can handle them. And a number of bit performances, including actual police squads and a team of emergency-room doctors, lend vivid local color and authenticity to an engrossing and adult crime caper.” — from A.H. Weiler‘s January 1973 review in the N.Y. Times.