39 Comments
One Of Worst Oscar Years Ever

The Oscars get it wrong almost every year, and the 37th Academy Awards, handed out on 4.5.65, were no exception, particularly in three categories. My Fair Lady (which I can’t even bring myself to watch on Bluray) got more votes than the masterful Becket and Dr. Strangelove for Best Picture, and George Cukor beat Peter Glenville and Stanley Kubrick for Best Director…c’mon! Rex Harrison beat out Strangelove‘s Peter Sellers, Becket‘s Peter O’Toole and Richard Burton and Zorba The Greek‘s Anthony Quinn — who in the world of 2014 gives a damn about Harrison’s Henry Higgins? I understand the Harrison win only because of O’Toole and Burton being up against each other — a suicide move that ensured a split Becket vote.

In a 2.8 N.Y. Times column about the late Paddy Chayefsky and Dave Itzkoff‘s “Mad As Hell,” a sweeping tale of the genesis and making of Network, Maureen Dowd notes while Chayefsky “warned against ‘comicalizing the news,'” today’s news “has became so diminished that young people [have] turned to Jon Stewart and Stephen Colbert to learn about what was going on in the world.” 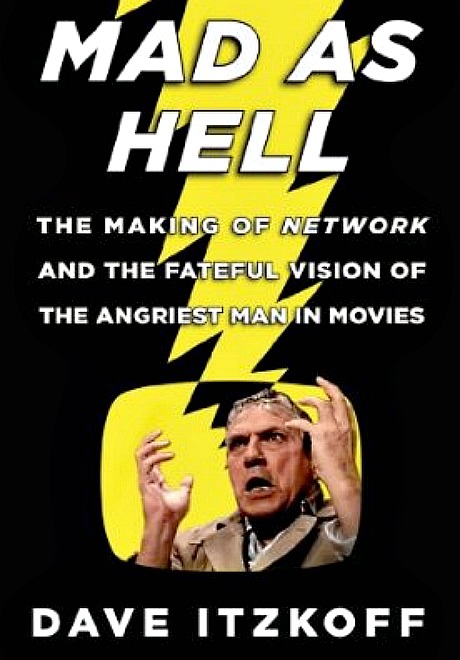 There’s a need for movies to downshift in the late portion of the Second Act (or early in the Third Act) so their main characters can have…oh, 90 seconds or two minutes or perhaps a bit more to deliver an extended riff of some sort. A soul-baring, an unleashing, an outpouring of feelings or principles. A couple of pages of dialogue that advances or clarifies the character’s motive or raison d’etre. It’s not that these scenes don’t happen often enough. It’s that they rarely do.

“The Santa Barbara Film Festival hummed along nicely. There was Cate Blanchett, there was David O. Russell, there were Marty and Leo. There was a tribute to the virtuosos. Half of the ones not nominated for Oscars were no-shows — Adele Exarchopolous, Oscar Isaac and Daniel Bruhl. Half of them did show up — Brie Larson and Michael B. Jordan, who were not nominated, and Jared Leto and June Squibb, who were. 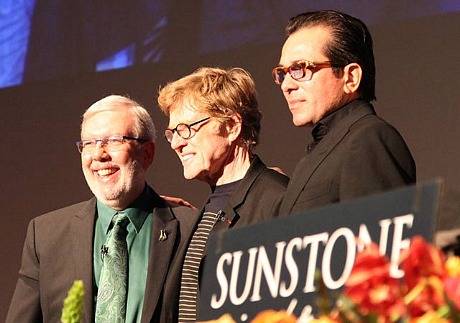 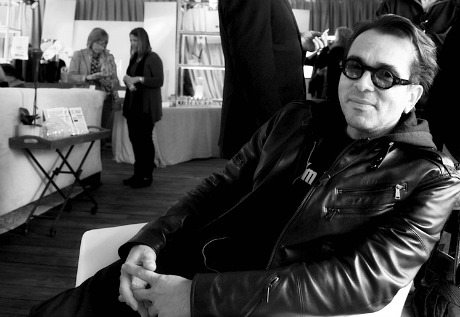 “Robert Redford was the second to last of the major tributes. He drew a huge crowd of appreciative movielovers, filling the Arlington. ‘I wonder who’s going to present the award to him,’ someone asked me. I didn’t know. Usually there is a high-profile celebrity who does the introduction, like Rooney Mara or Jane Fonda (who was down with the flu for Oprah Winfrey’s tribute).

I’m getting some dental work done in Prague this week. I’m taking a 12:45 pm train there tomorrow and staying for five or six days. I don’t have dental insurance, rates are much cheaper in Prague than in the U.S., and I’ve been assured by Expats.cz editor Jason Pirodsky that the guy I’m going to does excellent work so it made sense all around as I was going to be in Berlin anyway and it’s not that costly to get to Prague and stay there, etc. 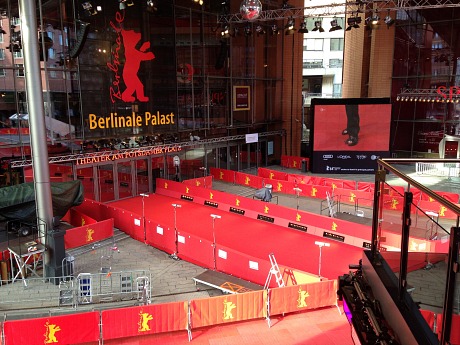 Taken this morning from the Audi Lounge next to the Berlinale Palast, about an hour before the noon Nymphomaniac screening. An Audi Lounge assistant gave me the wifi password but the connectivity wad down…naturally! 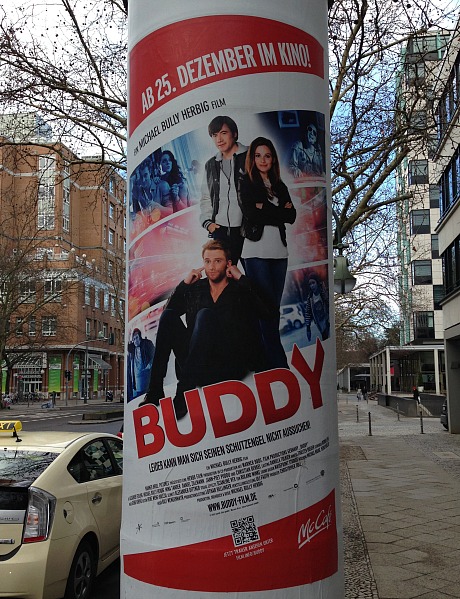 The poster for Michael Herbig’s Buddy, which opened here two months ago, reminds that puerile, lightweight formula comedies are popular the world over. 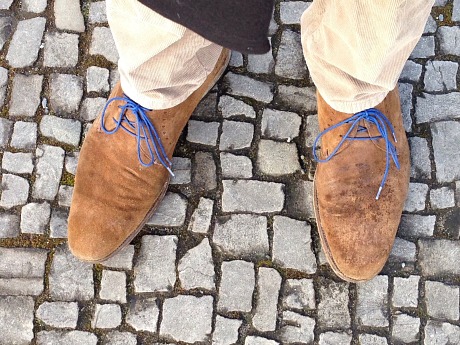 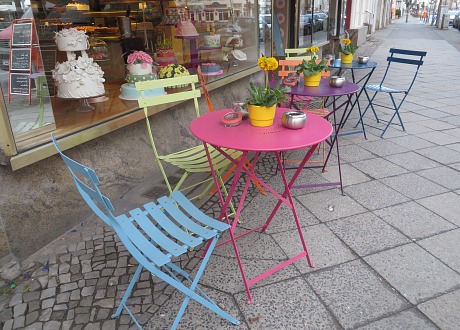 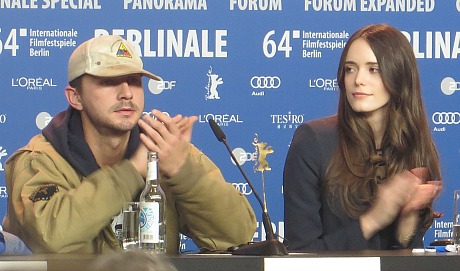 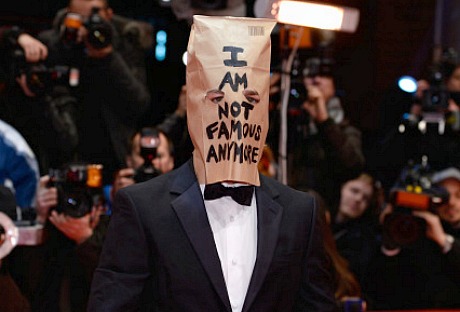 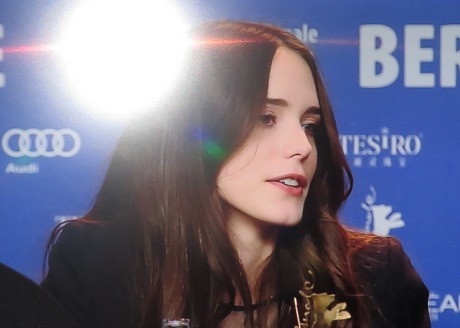 I attended the noon screening of Lars Von Trier‘s Nymphomaniac, Volume One with my soul and spirit engaged, but it wasn’t long before I began to feel vaguely anesthetized and zoned out.

This explicit first portion of the 5 and 1/2 hour Nymphomaniac (which will probably be unveiled in its entirety at next May’s Cannes Film Festival) is an intelligent, jaggedly assembled, dispassionate wank that aims to provoke and intellectually arouse with an assortment of classroom observations about a young girl’s scientific, emotionally arid approach to compulsive sexuality, but without anyone (including audience members) getting off or feeling serene for the experience.

Metaphors about fly fishing and the shapes of leaves abound, but libidinal stirrings are not on the table. 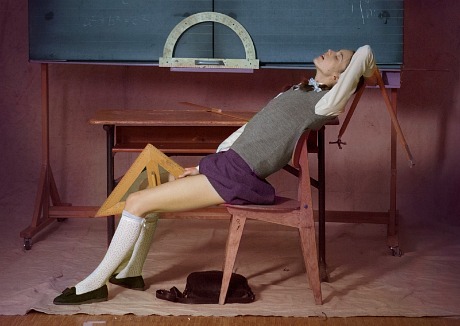 I guess I should give Von Trier credit for having achieved this peculiar synthesis. A dry, ironic tone does contribute to a series of faintly satiric philosophical points, and an assortment of explicit sex depictions are made to seem quite clinical and occasionally tedious, and vaguely repellent from an emotional/spiritual standpoint. Deliberately, I mean.

For this is a meandering, discursive, tension-free wankathon that I’m now vaguely associating in my head with Dusan Makavejev‘s W.R.: Mysteries of the Organism (’71). I saw it on VHS too long ago to remember much, but I’ve read enough reviews to know that W.R. was generally regarded as somewhere between a put-on and cinematic nerve gas. Despite enthusiastic arias that festival dweebs may be writing about Von Trier’s film as we speak, Nymphomaniac, Volume One definitely lives up to the W.R. challenge.