In my realm the basic Oscar oppression is that Academy members always vote from a lazy and complacent place. They’re too old and smug and soft-minded to search for and identify and support the best films. They prefer comfort to envelope-pushing or greatness. But in Marshall Fine’s view, this is nothing compared to the much bigger sensibility gap between those of us who follow the Oscar race and average ticket buyers who don’t give a rat’s ass, and the fact that the economic benefits of being nominated or winning are in flux as we speak. 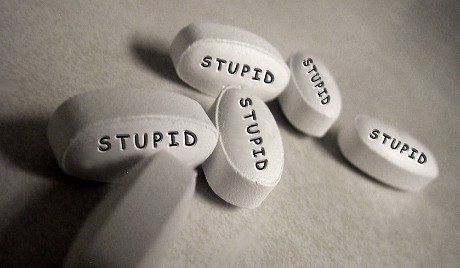 There’s always been a huge aesthetic gap between Serious Film Catholics and casual ticket buyers. The former tend to view Average Joes as not just “easy lays” whose tastes are stubbornly unsophisticated, but in some ways committed to being “stupid and ineducable,” to quote from “The Film Snob’s Dictionary.”

“Multiple sources” have told The Hollywood Reporter‘s Stephen Galloway that Sandra Bullock‘s Gravity compensation will be at least $70 million “when all revenue streams are factored in,” the story says. “Bullock’s deal with Warner Bros. for the Alfonso Cuaron-directed space epic calls for her to earn $20 million against 15 percent of first-dollar gross. That means once her advance is covered, she will collect 15 percent of the studio’s slice of the [rental] pie.” 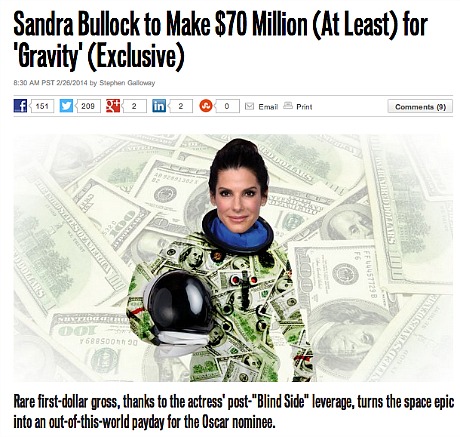 For some arcane reason Steven Soderbergh has created a mash-up of Alfred Hitchcock‘s Psycho (’60) and Gus Van Sant‘s color Psycho remake (’98). I guess you could call this an interesting experiment. I never much liked the Van Sant because he didn’t really remake the Hitchcock classic frame-for-frame — he fiddled with the particulars. “Lowery? I am dying of thirstaroonie.”

Last night Gavin Smith‘s Film Comment Selects series screened a double-header under the title “Healthcare Mayhem” — Blake Edwards‘ mediocre The Carey Treatment (’72), a Boston-set James Coburn drama that no one ever has to see or contemplate ever again, and a “pink” print of Paddy Chayefsky‘s (and Arthur Hiller‘s) The Hospital (’71). Smith is coping with personality issues that prevent him from communicating like an adult, but I’m told that both 35mm prints were supplied by Quentin Tarantino.

After being indifferent for the longest time I’m now looking to drown myself in Martin Luther King scripts. Ava Duvernay‘s rewrite of Selma that Oprah Winfrey will be producing for Paramount. The Oliver Stone-authored revision of a King biopic (i.e, the one with Jamie Foxx attached) that was turned down by DreamWorks and Warner Bros. because it was too candid or revealing about King’s private life. And Paul Greengrass‘s Memphis project (i.e., the last days of MLK before his assassination that was on and off and then on and then off). I’ll even settle for an e-mail or call from someone who’s either read all the versions or has at least read coverage of same. I’ve heard all along that the Greengrass script is the best of them, but I’d like to dig in a bit and learn a bit more.

Darren Aronofsky had no choice when he set about designing Noah’s Ark for Noah (Paramount, 3.28). It couldn’t even vaguely resemble that perfectly designed, tanker-sized wooden vessel that Steve Carell built in Tom Shadyac‘s Evan Almighty (’07). And, of course, it had to look like something that could have actually been built by Average Joes in ancient times, and not something built by professional 21st Century shipbuilders in Nova Scotia, which is what the Evan Ark resembled. But Aronofsky’s Ark doesn’t look at all like something built to float. It looks like some kind of primitive warehouse or fortress. Men have known about the principles of ship-building since the dawn of the oldest civilization, and principle #1 was that all ships need a rounded bottom of some kind. So what is this? 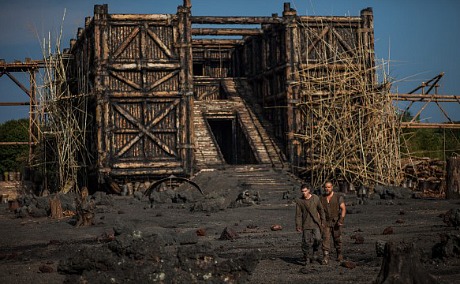 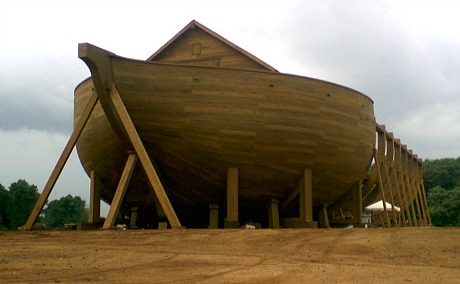 I’m not a big fan of true-life tales of characters surviving painful, ghastly ordeals. You know going in they’re going to make it through or why else would a movie have been made? So you pay your $14 bucks, you sit down and you’re stuck with the main character, suffering through this and that, nearly starving or being tortured or whatever agonies he/she endured. We can presume that the message of Angelina Jolie‘s Unbroken (which Universal is releasing next Christmas) is that you can’t give up, you have to survive, tenacity is everything, etc. Yeah, that’s true. But why do I have to experience Louis Zamperini’s World War II ordeal? What’s in it for me?

There was one chance to save Non-Stop (Universal, 2.28), the latest action thriller starring Liam “Paycheck” Neeson…one chance to make it into something half-special or at least surprising. Neeson plays Bill Marks, an alcoholic air marshall on a New York-to-London flight. Before the plane is over Maine he’s dealing with a secret texter on the plane who’s threatening to kill passengers unless the airline transfers $150 million to his account. But it’s soon learned that the account is in Marks’ name, and before you know it the news channels are reporting that Marks is the bad guy. Or is perhaps a good guy with an evil twin or a split personality…something. He’s not, of course — nobody is going to pay Neeson eight figures to play the villain. But it would’ve been cool if the film had bitten the bullet and gone dark and subverted expectations. That, at least, would have woken me up.

Last night Awards Daily‘s Sasha Stone posted a report about a Vanity Fair-sponsored Oscar bloggers panel that happened yesterday afternoon, and the “bombshell” of that event, says Stone, came when veteran publicist Peggy Siegel, who’s been staging toney Oscar-related gatherings in Manhattan for many years and who kibbitzes with Academy members and journalists constantly, “said that voters she spoke with (and remember, she goes to EVERYTHING) could not even bring themselves to watch 12 Years a Slave. You have to watch it, she would urge them. But they would hold up their hands and say ‘I can’t!'” 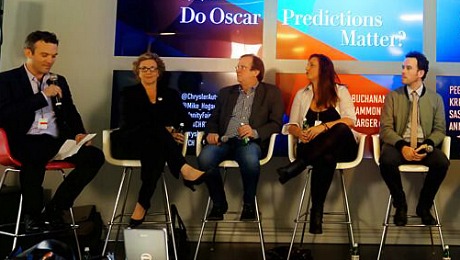 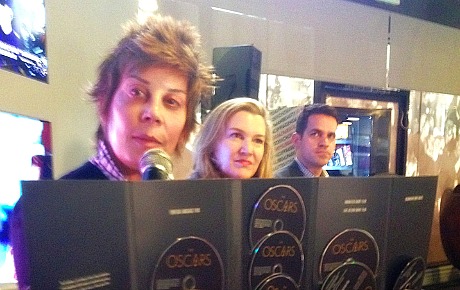 To me that sounds like bad news for Slave and the Fox Searchlight team, but what do I know?

I’ll tell you what I know. For decades members of the Academy of Motion Picture Arts and Sciences have made themselves infamous for succumbing to soft, tepid emotional impulses in their voting for Oscar winners, but lately it’s gotten worse. It seemed for a while that they were getting braver by giving Best Picture Oscars to The Hurt Locker and No Country For Old Men, but the last three years have been crushing with Best Picture honors going to The King’s Speech, The Artist and Argo. And now (I hate to say it but it’s probably true) effing Gravity. Academy folk like what they like and don’t give a damn about what history will say or what people outside the narrow little AMPAS culture think about their mediocre aesthetic standards.

The problem with the Academy can be boiled down to the “deadwood” members — the over-the-hill crowd that doesn’t work that much (if at all) and whose tastes are conservative and smug and myopic. These people, I’m convinced, have been refusing all along to get past themselves and bow down and show 12 Years A Slave the respect and praise it absolutely deserves. Steve McQueen and John Ridley‘s film is honest and searing and, yes, at times difficult to watch, but it’s brilliantly sculpted and superbly acted and profoundly affecting if you let it in. But the old farts have been stand-offish if not hostile from the get-go. Dollars to donuts they’ve all voted for Gravity or American Hustle or even Philomena, but…well, nobody knows anything but my guess is that Siegel’s comment probably speaks volumes.