Early last fall certain award-season pundits began to elbow aside Blue Is The Warmest Color‘s Adele Exarchopoulos as a Best Actress contender. Not because her performance isn’t wonderfully skillful and alive, but because award-season hoopla is almost always about celebrating familiar brand-name actresses who are already in the game and have established p.r. veterans orchestrating their interviews and whatnot. Exarchopoulos was deep-sixed for not being famous enough and because IFC Films/Sundance Selects didn’t have a big enough bankroll behind her campaign. Cate Blanchett has the Best Actress Oscar in the bag, but her Blue Jasmine performance seems narrow and shrill and “theatrical” when you compare it to Adele’s au natural-ism, her breathtakingly open and vulnerable and aching…I don’t know what to call it but it was more than just a “performance,” and it damn well should have been a knockout punch. It certainly was for me.

It’s time once again to ask the Universal Home Video guys why we still can’t buy, rent or stream Frank Perry, Joan Didion and John Gregory Dunne‘s Play It As It Lays (’72). Every two or three years I re-post an article that I wrote in 2003 about its absence. It played years ago on the Sundance Channel but right now it’s not on Amazon, Hulu, Vudu or Netflix The last I checked Universal had the home video rights, and as far as I know the ball is still in their court. How many years or decades is this negligence going to continue?

A half-hour ago Sao Paolo entertainment journalist Guilherme Genestreti asked me the following question: “The 2014 Academy Awards seem to be the most disputed in the decade if we consider that five of the nine best Picture nominees have been awarded by the guilds (SAG, DGA, PGA, WGA). In your opinion, why is there a lack of a clear consensus for a Best Picture winner this year?”

My answer: “There was only one grandslam, socially-reflective auteurist super-flick that will be watched and pondered decades hence, and which clearly deserves to win the Best Picture Oscar, and that’s The Wolf of Wall Street. But the old, calcified and conservative Academy membership is too smug and reactionary to get this. They basically like to give awards to movies that make them feel emotionally comforted and which validate their own feelings of self-worth (like Crash) or echo their core emotional feelings, and no Best Picture nominee has movie has really done that this year.

Sasha Stone slapped me around yesterday for not posting that Lee and Low chart showing the lack of diversity among members of the Academy of Motion Picture Arts and Sciences. I just figured it was old news that the Academy membership is primarily old (or oldish), white, clubby and liver-spotted. Two years ago an L.A.Times survey reported by John Horn, Nicole Sperling and Doug Smith informed that Oscar voters are nearly 94% Caucasian and 77% male, have a median age of 62.

Here’s the real problem, as the Times survey informed: “People younger than 50 constitute just 14% of [AMPAS] membership.” The over-50s run the show, I realize, but the under-50s should constitute at least 1/3 of the membership, if not a greater percentage.

I also feel it’s not necessarily a profound loss to world culture that, as the chart states, “over the last 10 years no winners of acting Oscar have been of Latino, Asian or Native American descent.” To that I say, “Really? Well, keep trying!” Honestly…why should I give a damn if a politically correct Utopian vision of demographic equality hasn’t been reflected by acting Oscar winners since 2004? It’s a Darwinian world out there, my friends. Scramble or be scrambled upon. Dog eat dog. Dog doesn’t return the other dog’s phone calls.

Three days ago a “tribute statue” of the late Steve Jobs, designed by Serbian sculptor Dragan Radenovic, was unveiled in Belgrade. [Photo after the jump.] It’s basically Jobs’ head on a four-sided pole with Cyrillic letters and a “1” and a “0” sticking out. It immediately reminded me of that green-head-in-a-fishbowl alien in William Cameron Menzies‘ Invaders From Mars (’53). The face of this Mediterranean-looking guy with the big brain helmet and the serpent tentacles (and no arms or legs or trunk) is one of the creepiest images the movies have ever delivered. Mr. Fishbowl, a kind of Einstein general behind the Martian invasion, was described in Act Three as “the sum of all intelligence.” He conveyed his orders to the Martian mutants by moving his crab pincers. 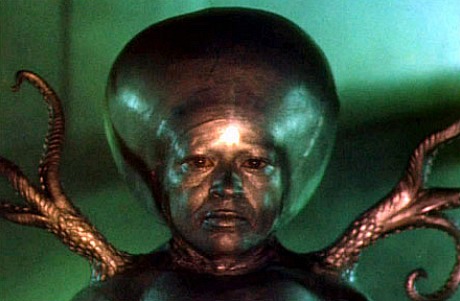 This isn’t the first time that memories of the fish-bowl guy have been stirred.