A Film Society of Lincoln Center screening of David Jones‘ long-absent Betrayal (’83) is happening tonight at the Walter Reade theatre. My flight to Los Angeles leaves around 4:30 pm otherwise I’d be there with bells on. I’ve been writing for years about the fact that this superb adaptation of Harold Pinter‘s celebrated stage play can’t be bought, borrowed or rented. I’ve written FSLC staffers for information. Here’s what I said: 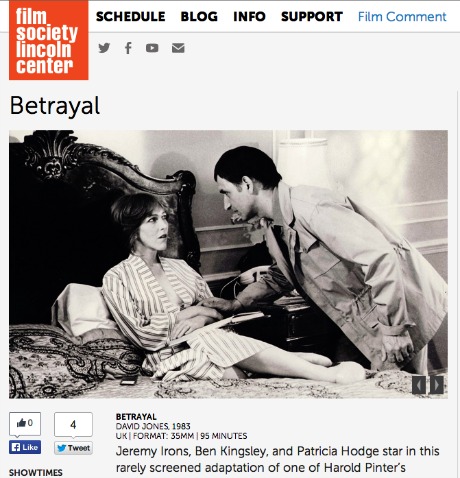 “FSLC publicists are saying Gavin Smith arranged for the booking of David Jones‘ Betrayal for tonight’s screening at the Walter Reade. I’ve been asking for years why this film hasn’t been available for purchase, rent or digital download. Could you please answer the following ASAP, or as many hours as possible before tonight’s screening?

1. Who has provided the print or DCP of Betrayal for Tuesday night’s screening? What person, what company, etc.? Names, email, phone #.

2. What is the general situation regarding making this film available for HD digital rentals on Vudu or Hulu or Netflix or Amazon? What about a DVD or Bluray?

3. Why hasn’t it been on DVD ever? What’s been the hold-up all these years? Nothing to do with Fox, I gather. I was told long ago that the hold-up has to do with the family of the film’s late producer, Sam Spiegel. Betrayal was Spiegel’s last produced film. The VHS distributor was CBS/Fox Home Video. I recently went so far as to try and discover the particulars from a friend and former lover of Betty Benson, who was Spiegel’s last wife, as Betty was on her death bed. The effort was unsuccessful.

4. Does your FSLC screening indicate that Betrayal might be available before too long in various media? Did you ask any of these questions of whomever offered you the print?

5. Betrayal hasn’t been viewable anywhere except as a VHS which came out sometime in the mid to late ’80s, I think. No DVD. No Bluray. No digital versions available for rental…nothing. A 9.19.11 IMDB post claims that Betrayal was allegedly shown on Showtime HD.

Please inform as fully as possible, and as specifically as possible…thanks. I consider tonight’s FSLC screening to be a major event…needs to be discussed and explored.”

Here’s an HE piece I ran last June called “What A Pitch!“:

“Hodge is a fine actress but she’s just not hot enough to ignite desire in the mind of the viewer. And given that she inspired Kingsley’s best friend, played by Jeremy Irons, to lead her into an affair that lasts roughly seven years, she should. There’s no trouble believing that Irons is smitten (his declaration of unquenchable love at the finale is classic) but Hodge couldn’t be less arousing. She seems a bit brittle. Too sensible and practical to be good in bed. Not to mention that long pointy nose and those odd watery eyes.

“Helen Mirren, however, would have been perfect. She can do refined and haughty to a T, but has always conveyed a ripe sexual undercurrent. But Betrayal producer Sam Spiegel decided against using her. An IMDB trivia post reports that Hodge and Mirren “were both tested for the role of Emma, but that Spiegel eventually chose Hodge because Mirren’s ‘butt was too big for the part.'” What? There’s no shot of Hodge’s or anyone else’s butt in the film.

“What this means, probably, is that Spiegel (whose Hollywood nickname was “the velvet octopus” for his tendency to wrap himself around various women in the back of cabs) had a personal thing for slender British ladies with a chaste vibe.

“This scene is about Hodge reluctantly confessing to Kingsley that her affair with Irons is happening, and in fact for the previous five years. The writing is magnificent. Kingsley’s insinuations are priceless.

“I wrote my first “where the hell is a Betrayal laser disc?” piece in 2005. Since then I’ve been complaining about the absence of a DVD version. A Bluray would be all the better. For years the assumption was that the rights had reverted to the family of producer Sam Spiegel (who died in ’85) and that they were holding back on a deal for some reason. But a 9.19.11 IMDB post claims that Betrayal was allegedly shown on Showtime HD. If that actually happened then the film has been mastered for HD (probably within the past three or four years) which means somebody who owns the Betrayal rights has been allowing for some limited form of digital distribution. So there’s hope, at least.”