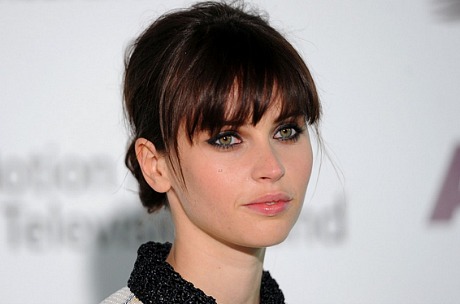 Now we have Doremus’s Breathe In opening on 3.28 and I’m not sure I even want to see it because of Jones. You have to want to see someone before you can admire their acting talent. Why do audiences decide they like some actors and actresses and not others? It’s a queer mystical process but some have it and some don’t. I don’t mean to be cruel but Jones is just not schwing material and I’d rather not go there…no offense. Fair warning: if Jones is in a major role, I’m either going to delay seeing the film and/or find some way to not like it when I do. Or…you know, like it less than I would if Jones wasn’t in it. I’m sorry but that’s my decision.

There’s a moment in Inside Llewyn Davis when Max Casella sits down next to Oscar Isaac in the cafe as Carey Mulligan and Justin Timberlake are performing “100 Miles,” and he says, “That Jean, I’d like to fawck huh.” Unfair and primitive as it may sound, actresses have to trigger this reaction or they’ll never be a star. It’s this or become Meryl Streep. I’m sorry.