8:56 pm: Will Smith presenting the Best Picture Oscar. This is it. 12 Years A Slave wins! Good God! All the people who wouldn’t watch it, all the people who frowned…there weren’t enough of them in the end. Amazing! I can’t believe it. A lot of people who didn’t see it must have voted for it anyway. I’m really astonished and very, very pleased. Wow! Good, excellent, wondrous thing. The sour-faced people were heard from, but they weren’t numerous enough. Steve McQueen hops up and down…yes! I owe Glenn Kenny $50 bucks. Did American Hustle win anything? Nope.

8:51 pm: Jennifer Lawrence presenting the Oscar for Best Actor, which will go to Matthew McConaughey. Pre-ordained. Kisses and hugs. McConaughey: “Thank, thank you, thank you to the Academy for this. First off, I wanna thank God.” What? God does not have a rooting interest in anything. “To my family, which is what I look forward to. My mother taught…demanded that we respect ourselves. And to my hero…that’s who I chase. I’m never going to be my hero. [What matters is] somebody I keep on chasing.” And then he says “aww right aww right, aww right.”

8:43 pm: Daniel Day Lewis presenting the Best Actress Oscar to Cate Blanchett. We only have to wait for him to say the name. (Worst clip: Judi Dench delivering that horrid, detestable line about forgiving the old-crone nun and not wanting to be like Steve Coogan.) Blanchett! The name is spoken! “It means a great deal.” “Thank you so much Woody for casting me.” Compliments to Amy Adams, Sandra Bullock, Judi Dench, Meryl Streep. And a plug for films about women which make money. “The world is round, people!” An elegant speech, very well delivered.

8:36 pm: Angelina Jolie and Sidney Poitier presenting the best Director Oscar to Alfonso Cuaron. And after some uncertainty as to who will read the name, Ms. Jolie says “and the Oscar goes to Alfonso Cuaron.” Best line: Cuaron thanking “the wise guys of Warner Brothers” and then corrects himself by saying “the wise people of Warner Brothers!” Wise guys was better, Alfonso.

8:22 pm: Robert DeNiro and Penelope Cruz presenting the Best Adapted Screenplay. John Ridley‘s 12 years A Slave screenplay wins! Good thing! (Could this indicate…could this possibly mean…?) John is grappling with surging currents of emotion, and is holding it together. Hats off. And the Best Original Screenplay Oscar (I’m rooting for Her) goes to…Spike Jonze for Her! Very wise choice. Very happy for Spike. Highly deserving.

8:15 pm: Jessica Biel and Jamie Foxx presenting the nominees for Best Original Score. Wait, let me guess…Gravity‘s going to win, right? Jesus God. Gravity‘s Steven Price wins! What is this, six Oscars now? Does everybody realize what a Gravity pigfuck this show has been over the last two hours and 45 minutes? Gravity is going to win the Best Picture Oscar. How can it not? Oh, yeah…Frozen (i.e., “Let It Go”) wins the Best Song Oscar.

8:05 pm: I’m sorry but something is off about Goldie Hawn‘s face. Too many injections or the wrong implants…something. None of us mind “work” if it’s done well, but you’re supposed to resemble your younger self on some level. Hawn looks waxy.

7:53 pm: Glenn Close presenting the Death Reel. Will Alain Resnais be included? Who are all these people? Jim Kelly, Mickey Moore, Charles Campbell? Roger Ebert and Dutch Leonard are included. Phillip Seymour Hoffman is the last face in the montage. No Resnais. Are you telling me they couldn’t fit him in at the last minute? They had hours to do this. Lazy! Bette Midler comes out to sing “Wind Beneath My Wings.”

7:46 pm: Terrific– the Oscar are presenting a tribute to brawny, dynamic, athletic heroes. Mostly CG super-heroes. Superhero movies are megaplex diversions, for the most part, and have absolutely no place in a show ostensibly devoted to celebrating the most profound or highest-aspiring films. This is just pandering. Pandering to the popcorn-munching apes.

7:44 pm: Jennifer Garner and Benedict Cumberbatch handing out the Best Production Design Oscar. is Gravity nominated? Good God, it is. Please don’t give this to Gravity…please, I’m begging you. Thank you! The Great Gatsby takes the Oscar, the second Gatsby win of the night.

7:30 pm: If Gravity wins the Best Editing Oscar, I fear the worst as far as the Best Picture Oscar is concerned. Good God, Gravity has won. Five Oscars so far. The Academy really loves this technically impressive thrill ride. Gravity, dammit, is going to win the Best Picture Oscar…eff me and double-eff the Academy. All those people who predicted 12 Years A Slave to win….well, I shouldn’t throw in the towel just yet, right? Hang in there.

7:28 pm: Emmanuel Lubezki‘s Oscar for Best Cinematography is about to be presented. And it is presented! What is that, four for Gravity now? Hooray for Bill Murray‘s shout-out to his Groundhog Day director, Harold Ramis.

7:22 pm: The three large pizzas have arrived! Pass ’em around…anybody got red pepper packets? Big Mamas and Papas Pizza gets the plug. The show is almost two hours old, and the four best moments so far have been (a) Lupita Nyong’o‘s big win, (b) the group selfie, (c) the pizza and (d) Jared Leto‘s win.

7:14 pm: Best news of the night so far — 12 Years A Slave‘s Lupita Nyong’o wins the Best Supporting Actress Oscar! Lupita is so eloquent, so well-spoken, so poised, such a class act. She thanks everyone who deserves thanks. “No matter where you’re from, your dreams are valid…thank you.”

7:07 pm: Chris Hemsworth and Charlize Theron presenting the Best Sound Mixing oscar, and Gravity wins it. Skip Lievsay, Niv Adiri, Christopher Benstead and Chris Munro. And the Oscar for Best Sound Editing goes to Gravity also. Actually to Glenn Freemantle. That’s three for Gravity now, and I’m sorry but this feels like a kind of omen.

7:01 pm: The group tweet photo routine was the coolest thing so far. Here it is: 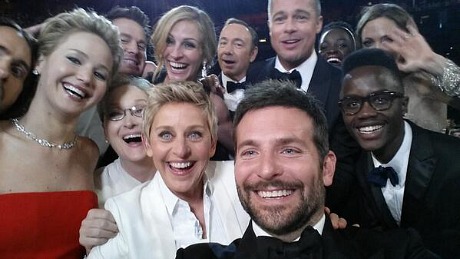 6:55 pm: Brad Pitt introducing U2 and “Ordinary Love,” their Mandela: Long Walk to Freedom song. Negligible film, negligible song. Naturally it gets a standing ovation. The show is almost 90 minutes old, and I’m thinking “when will things really start?”

6:50 pm: Ewan McGregor and Viola Davis announcing the Best Foreign Language Oscar, which Paolo Sorrentino’s The Great Beauty is expected to win. And the Oscar goes to The Great Beauty. No offense, but HE’s favorite foreign-language nominee was and is Omar.

6:37 pm: Bradley Cooper presenting the Oscar for Best Documentary, and we’re hoping that the winner will be Morgan Neville‘s 20 Feet From Stardom. Okay, I’m hoping for this. And 20 Feet From Stardom wins! I’ve been on this baby for 13 months. Darlene Love mentions God again! And sings a cappella! Except she thinks God is watching and rooting her on. I explained the fallacy of this belief yesterday, to wit: “God has no rooting interest in your happiness or fulfillment. He really doesn’t give a shit. He’s impartial.”

6:28 pm: Kate Hudson and Jason Sudeikis are presenting the Oscar for Best Live Action Short Film, and the Oscar goes to Helium. And now the Best Documentary Short Subject Oscar, and The Lady in Number 6 wins. Let’s hear it anyway for Facing Fear, which didn’t win but is quite moving and worth seeing. (I caught it at a special screening a couple of months ago.)

6:28 pm: The Oscar telecast is almost an hour old and I’m feeling a little bored, man. A little underwhelmed.

6:24 pm: I’ve seen Her twice, and I never really got into “The Moon Song”, which is one of the Oscar-nominated songs. Karen O and an acoustic guitar player just performed it like a couple sitting on stools in a small cafe or in their kitchen or whatever. It might have the right way to perform the song, but — let’s be honest — underplaying it didn’t quite cut it.

6:17 pm: The only thing we hate more than animation is CG visual effects that look like CG visual effects. But Gravity‘s VFX are quite good, as we all know, and so the Gravity team deserves the Oscar. Nothing indicated by this win. They just did a good job.

6:17 pm: Sally Field introduces a riff about…great performances that deliver some degree of social relevance? I was waiting for the idea to come together. It still hasn’t.

6:13 pm: Kim Novak (good work, implants or injections, deep breathy voice) and Matthew McConaughey announcing Best Animated Short film. Mr. Hublot, which I’ve never seen and probably never will see, is the winner. Congrats to the French guys at the mike right now. And the Oscar for the Best Animated Feature film goes to Frozen…no surprise! Before announcing Kim acts as if it will be surprising to somebody.

6:07 pm: Channing Tatum…oh, six new young filmmakers chosen for the attention and the boost and whatever else. Can we get back to the show? 35 minutes gone and Jared Leto has won his long-predicted Oscar…that’s pretty much it so far.

5:57 pm: Samuel L. Jackson has lost weight. A good 10 or 12 pounds, I’d say. Cockatoo action. Oscar for Best Costume Design goes to Catherine Martin for The Great Gatsby. 12 Years a Slave‘s Patricia Norris was nominated for this Oscar — does this suggest something? The Hair and Makeup Oscar goes to Dallas Buyers Club‘s Adruitha Lee and Robin Mathews. Two Oscars so far for DBC, and at least three (i.e., McConaughey’s) before the night’s out.

5:51 pm: Great — a tiresome (or do I just mean lame?), tediously energetic Pharrell Williams Las Vegas number with dancers dressed like preppies. It this song was on the radio I would instantly turn it off. Get outta here!

5:43 pm: Jared Leto wins Best Supporting Actor. Of course. And I told him he had the heat back at that first Toronto Film Festival party, and Leto said, “I just wanna make sure it’s real.” It’s real, all right. Kudos to Leto’s mom and his big brother. Leto mentions the people in the Ukraine! “We are here, and as you struggle to make your dreams happen, we’re thinking of you tonight.” “This is to the 36 million who have lost the battle to AIDS…I stand before the world, with you and for you.”

5:33 pm: Ellen DeGeneres sounds sort of Dick Cavett-ish tonight. “Possibility #1 — 12 Years A Slave wins Best Picture. Possibility #2 — you’re all racists.” “People who have sex at rodeos. Speaking of [that], Bruce Dern is here tonight.” Jennifer Lawrence falling again tonight…good. “If you win tonight, I think we shoudl bring you the Oscar.” “The lack of college educations…meh. “One big frightened family….we all know that the most important thing in life is youth.” “I think you can think of yourselves as winners…not all of you.” “One of the most amazing Liza Minelli impersonaotors I’eve ever seen in my life…god job, sir.” “I’m not going to say who looks the most beautiful, but it’s Jared Leto.

March 2, 2014by Jeffrey Wells190 Comments
« Previous post
HE Oscar Ballot Winners!
Next post »
Better Chops Than In All Of Gravity