I actually posted the following just after seeing Mr. and Mrs. Smith in June 2005, or nearly nine years ago. The opening paragraph contains a wildly off-the-mark call. It’s such an embarassing wrongo that I felt obliged to re-post it today. The review of the film is still valid, of course.

“Romances between immensely attractive, super-successful movie stars don’t last for all kinds of reasons. I won’t go into all the usual factors but one thing that really throws a monkeywrench into these relationships is when their children — i.e., the movies they make together — turn out badly. The Brad Pitt + Angelina Jolie alliance is toast. I don’t actually know if they’re ‘with’ each other and it’s none of my damn business anyway, but they’re in Mr. and Mrs. Smith together and if my observation has any validity they’re doomed as a couple because their child is a rank embarrassment…a thoughtless, pointlessly prettified, emotionally neutered Mongolian idiot.

“It’s Charlie’s Angels 2 bad, Xanadu bad, Hook bad, Howard the Duck bad. It’s soulless, unfunny (except for some of costar Vince Vaughn‘s lines), bombastic, totally sterile and inhuman. Did I leave out hateful? I don’t want to go over the top here so let me take a breath and step back for a minute or two and collect myself. (Beat.) Okay, I’ve done that…fine. I’m calm. I’m breathing easy. This movie has cancer of the soul. It made my skin crawl.

“But it’s tracking really well and 20th Century Fox is going to get a very big opening weekend out of it, and then the word will go out and the public will do whatever. I’m told that the $110 million-plus tab was fronted by New Regency Pictures so Fox probably won’t be hurt that badly.

“Mr.and Mrs. Smith might even turn a modest profit. (I just winced after writing that.) I told a friend at Fox News this morning what I think and he replied, “Really? I’ve heard good word of mouth.” And the Hollywood Reporter‘s Michael Rechtshaffen is calling it “a blast” and “explosively funny.” There’s really no accounting for taste.

“Rechtstaffen says that Pitt and Jolie “expertly [toss] off the type of well-sharpened banter that was the domain of Gable and Lombard and Tracy and Hepburn, [and] make one swell combative couple.” Forget the banter. The only thing these two have going for each other in this film is the fact that they’re attractive and well photographed. 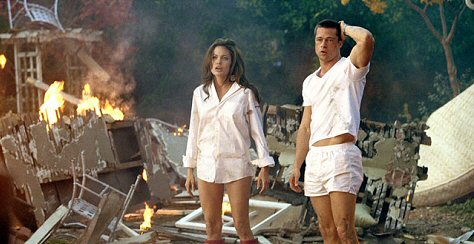 “What happened here? Doug Liman, the director, is one of the hippest and brightest guys working in the big leagues right now. I’m a fan from way back (loved Swingers, adored Go, really liked The Bourne Identity) and I’m just in shock about this.

“Remember that wild Las Vegas car chase in Go? Fantastic and funny, beautifully staged and edited…and there isn’t a shred of the same cleverness or whoopee humor in any of the Smith action sequences.

“That Matt Damon car-chase sequence through the streets (and over the sidewalks and down the stone staircases) of Paris in The Bourne Identity? It was nearly a classic, right up there with the John Frankenheimer Paris chase sequence in Ronin…and that old Bourne magic vanishes when the Smiths hit the road.

“I’m speaking of a freeway car-chase shootout in the third act that reminded me of the highly-touted freeway blastaway in The Matrix Reloaded, which wasn’t that great in retrospect.

“Don’t studio execs understand that without a fresh idea or subversive attitude of some kind that sequences filled with bullets and velocity and crashing metal are numbing and infuriating, not to mention totally over? 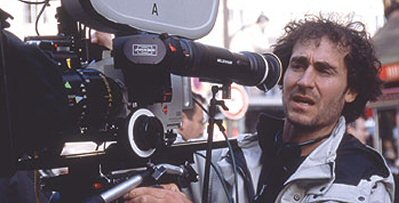 Doug Liman during shooting of The Bourne Identity.

“I’m referring to the Fox and New Regency executives who rode herd on this because Mr. and Mrs. Smith feels a lot more like their film than Liman’s. I know that Liman was very precise and exacting on the set, but this movie is an almost total perversion of everything the words “a Doug Liman film” have meant to me over the last eight or nine years, so I’m figuring studio muscling had to be at least part of the equation…right? If it wasn’t then I don’t know what to think. I’m stunned.

“Ludicrous isn’t the word for the basic idea, which is that John Smith (Pitt) and his wife Jane (Jolie) are both highly skilled assassins who’ve kept their professions hidden from each other and so both are totally clueless until fate intervenes. The only way to run with this set-up is to accept it as a metaphor. A look at a marriage gone dry in a soulless, money-obsessed culture, and how a typical fast-lane couple manages to renew their desire for each other and fall back in love again.

“They accomplish this feat by trying to kill each other. It gets them hot and bothered and re-arouses their libidos.

“The problem is that the metaphor isn’t developed or played with to any degree. The internals barely register. You don’t given a damn about Pitt or Jolie’s hearts or souls, much less their marriage, because the film is so invested in gloss and hardware and terrific clothes and one stupendously dull video-game action sequence after another. 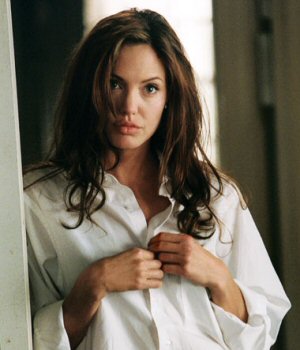 “Except, that is, for some marital-therapy sessions between Pitt and Jolie that Liman uses as bookends. (I’m guessing these were from the post-principal additional photography shoots, thrown in to humanize their relationship.) Their rapport in this footage feels loose and less constrained in a semi-improvised, Soderbergh-y way. It’s the only thing Pitt and Jolie do in this film that feels the least bit engaging.

“I really can’t believe this Rechtshaffen review. He calls it ‘adult-skewing.’ He says ‘it could have easily been a Hitchcock vehicle.” The ‘bottom line’ tagline above his review says it’s ‘The Bourne Identity meets The War of the Roses.’